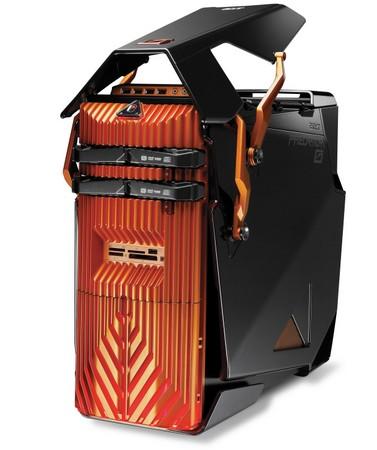 When launched back in 2008, Acer's Predator desktop was a mean gaming rig -- and we don't just mean because it had a tendency to actually set things on fire. We're pretty sure the new, just announced revision of the desktop won't suffer the same ailment, a non-customizable update that sports a 2.8GHz Core i7 930 CPU, an NVIDIA GeForce GTX 470 GPU, 1.5TB of storage, 12GB of DDR3 RAM, and an asking price of one buck under $2,000. That's a solid deal, and the new black and orange case design looks solid too, every bit as loud as old orange and black one. It's just perfect for showing your opponents just how serious you are about your gaming, though we're thinking it might have been even more popular if the Stanley Cup had gone the other way.
In this article: acer, acer predator, AcerPredator, core i7, core i7 930, CoreI7, CoreI7930, gaming desktop, gaming rig, GamingDesktop, GamingRig, geforce gtx 480, GeforceGtx480, intel, nvidia, predator, predator gaming desktop, PredatorGamingDesktop
All products recommended by Engadget are selected by our editorial team, independent of our parent company. Some of our stories include affiliate links. If you buy something through one of these links, we may earn an affiliate commission.
Share
Tweet
Share