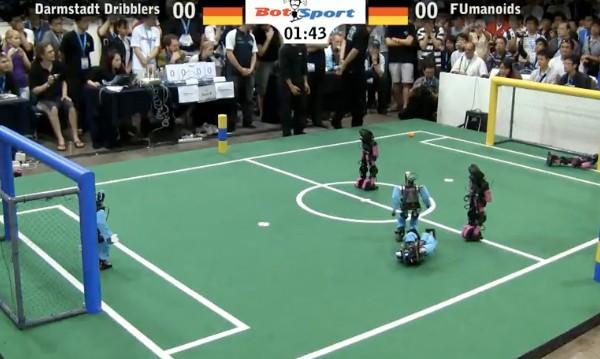 The World Cup may still be ongoing (despite what the US, England, and a handful of others may think), but the RoboCup 2010 in Singapore has just closed shop with an edge-of-your-seat display of autonomous action. The final game came down to two German teams, the Darmstadt Dribblers and the FUmanoids. As seen at numerous points, both android teams have even learned the ancient art of diving, toeing the uncanny valley a little to close for comfort. Video after the break -- we won't to spoil the ending, so let's just say Germany won by a sizable margin.

If fierce competition isn't your cup of tea, we've also got footage of DARwIn-LC, a low cost (hence the name) humanoid from our friends at Virginia Tech's RoMeLa. These adorable little guys cost about $2,500 apiece and will be going out to 11 of VT's partner universities.

Update: Dr. Dennis Hong himself sent us a few clarifications. The DARwIn-LC is a collaboration between RoMeLa and the company Robotis. No price has been disclosed, but the $2,500 is incorrect. Additionally, the robot is being planned as a "true 'open platform.'" In Hong's words, "we are "planning" to post all CAD drawings, fabrication and assembly manuals, and also the basic software on-line for free. Thus any one with certain equipment, budget, and skills will be able to make one them selves - or purchase the entire thing or parts from Robotis. We want to form a community of DARwIn-LC users to share new ideas for improvement, hack it, etc. and use the robot for research, education, outreach, and of course, an easy entry point for the RoboCup humanoid division." Also hit up More Coverage to see how RoMeLa fared at RoboCup!