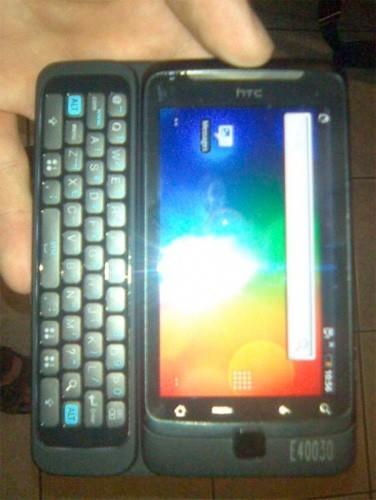 For reasons seemingly known only to Peter Chou himself, HTC has mostly steered clear of producing high-quality physical QWERTY devices running Android, despite the fact that there might be no phone manufacturer in the world more skilled at making them (let us remind you of the Touch Pro2, among many others dating back the better part of a decade). Anyhow, we caught wind last month of a possible entry in the form of the so-called "Vision," but we didn't have any visuals -- just a user agent profile that may or may not amount to anything. Well, that seems to be changing today with a couple blurry shots out of a Croatian site that allegedly shows the goods featuring a 3.7-inch display, a 1GHz processor (Snapdragon, we assume), and Android 2.1 with Sense (the launcher looks like stock Android in this photo, but the status bar is clearly HTC custom). At a glance, it doesn't seem to be the prettiest thing in the world -- but for a form factor traditionally associated with power users and suits, this might be just the ticket.

[Thanks, Ivan]
In this article: android, android 2.1, Android2.1, google, htc, in the wild, InTheWild, qwerty, rumor, sense, slider, vision
All products recommended by Engadget are selected by our editorial team, independent of our parent company. Some of our stories include affiliate links. If you buy something through one of these links, we may earn an affiliate commission.
Share
Tweet
Share