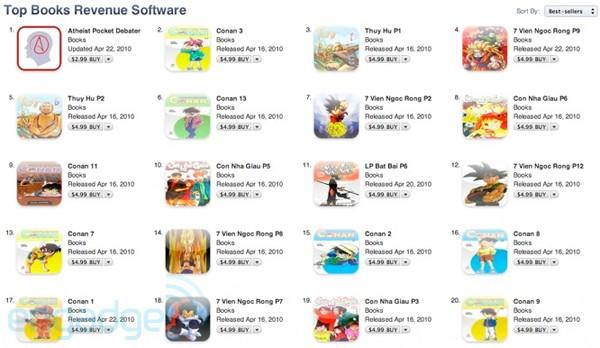 Over the weekend we saw reports of what appeared to be fraud occurring in the iTunes system -- namely, a rogue developer had somehow managed to snag 42 of the top 50 sales positions in the App Store's "book" category with seemingly bogus content. It looked as if there was some correlation between those suspicious sales and word of an increase in iTunes account fraud, but Apple had been mum on the subject over the holiday weekend. We've finally gotten a response from the company, and the folks in Cupertino say that the developer in question -- a gentleman named Thuat Nguyen -- has been chucked out of the Store altogether. Additionally, while they don't explicitly say fraud occurred, they suggest you check with your bank and kill your card if any of your info was stolen... which seems to suggest that something funky happened to some users. Here it is from the horse's mouth:

The developer Thuat Nguyen and his apps were removed from the App Store for violating the developer Program License Agreement, including fraudulent purchase patterns.

Developers do not receive any iTunes confidential customer data when an app is downloaded.

If your credit card or iTunes password is stolen and used on iTunes we recommend that you contact your financial institution and inquire about canceling the card and issuing a chargeback for any unauthorized transactions. We also recommend that you change your iTunes account password immediately. For more information on best practices for password security visit http://www.apple.com/support/itunes.

So it looks like even the walled garden isn't impervious to attacks -- here's hoping the problems were limited to a small group of people. Have any of you guys noticed strange charges on your account? Double check it right now!

Update: Apple pinged our old buddy Clayton Morris with the damage report and claims it's fairly low -- roughly 400 iTunes users were hit, all told. While that's a pretty small percentage of the reported 150 million Apple serves daily, the company said new security measures are in place anyhow: according to Morris, iTunes will ask for the verification code on the back of your credit card "a little more often" from now on.
In this article: app store, app store fraud, apple, AppStore, AppStoreFraud, fraud, itunes, itunes fraud, ItunesFraud, statement
All products recommended by Engadget are selected by our editorial team, independent of our parent company. Some of our stories include affiliate links. If you buy something through one of these links, we may earn an affiliate commission.
Share
Tweet
Share