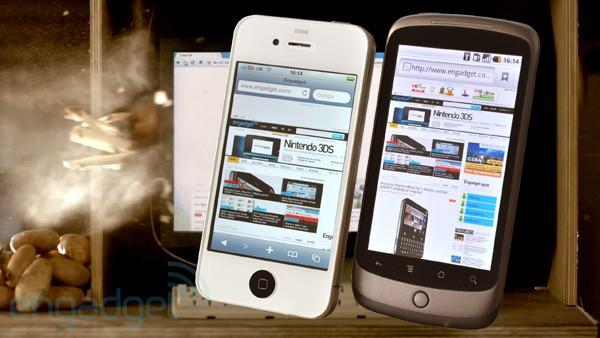 A little while back Google boldly claimed that Froyo would have the world's fastest mobile browser, but the lack of final software back then meant we'd had to tie up our itchy hands until now. And boy, it sure looks like it was worth the wait -- Ars Technica's JavaScript benchmarks show that not only is Froyo's browser almost three times faster than its Éclair counterpart, but it also beats iOS 4's Safari by at least two-fold. That said, numbers alone don't always reflect real-life performance -- especially with Froyo supporting iPhone's much-missed Flash -- so we went ahead and conducted our own browser speed test. Read on for our videos and results after the jump.

Update: for those who were concerned about the battery affecting the Nexus One's performance, we did use Android System Info to verify that the CPU was still clocked at 1GHz. We were also able to reproduce the same results with a full battery. Either way, it's still a win for Android.

Our test candidates were a 16GB iPhone 4 (with a shameless color mod) and a Nexus One rocking the official OTA 2.2 update and Flash 10.1. Naturally, we cleared out the cache files on both devices prior to each trial. Out of the five desktop-version websites that we tested for load time, three of them -- BBC News, gdgt and The Onion -- repeatedly produced a tie between the two phones, whereas the iPhone 4 consistently loaded Engadget about two to three seconds faster, and the Nexus One about one to two seconds faster with New York Times. Here's our video of one of the trials:


At this point we thought: would things load quicker with Flash uninstalled? Turns out it's a small yes -- this time the Nexus One consistently loaded Engadget, New York Times, gdgt and The Onion a tad quicker than the iPhone 4, whereas BBC News produced a tie. Still, this is far from the massive performance jump that Ars Technica's benchmarks suggest (not that we're saying the site did it wrong; these every-day sites just don't rely heavily on JavaScript), but considering Froyo running Flash still matches iOS 4's Safari loading speed, Android's just about won this two-man race. Apple, your move next.

In this article: android, android 2.2, Android2.2, apple, benchmark, browser, comparison, froyo, google, hands-on, ios 4, Ios4, iphone 4, Iphone4, javascript, nexus one, NexusOne, safari, video, webkit
All products recommended by Engadget are selected by our editorial team, independent of our parent company. Some of our stories include affiliate links. If you buy something through one of these links, we may earn an affiliate commission.
Share
Tweet
Share