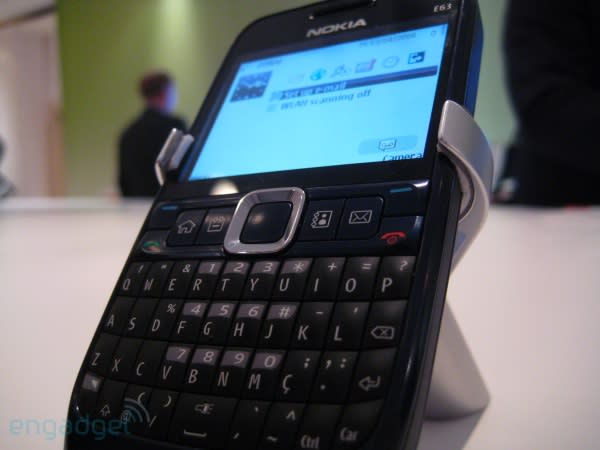 Nokia's looking to ride the mojo of any negative fallout from today's Apple press conference, slipping out a rather fascinating statement this afternoon. The gist of it is that Espoo's keen on letting everyone know how much blood, sweat, and tears they've poured into perfecting their antenna design strategy over the years, going so far as to say that they "prioritize" it over the physical design of the phone if they need to in order to optimize its call performance -- an opinion moderately different from the "we want to have our cake and eat it too" philosophy espoused by Jobs today. In closing, Nokia acknowledges that a "tight grip" can mess with the performance, though they say they've done a bunch of research on the ways their phones are typically held so that the antennas are placed optimally. Interestingly, there was a stink not long ago about the severe signal degradation some E71 users were seeing when they placed their hands on the lower rear of the phone -- but you can't win 'em all, we suppose. Follow the break for the full statement.

"Antenna design is a complex subject and has been a core competence at Nokia for decades, across hundreds of phone models. Nokia was the pioneer in internal antennas; the Nokia 8810, launched in 1998, was the first commercial phone with this feature.

Nokia has invested thousands of man hours in studying human behavior, including how people hold their phones for calls, music playing, web browsing and so on. As you would expect from a company focused on connecting people, we prioritize antenna performance over physical design if they are ever in conflict.

In general, antenna performance of a mobile device/phone may be affected with a tight grip, depending on how the device is held. That's why Nokia designs our phones to ensure acceptable performance in all real life cases, for example when the phone is held in either hand. Nokia has invested thousands of man hours in studying how people hold their phones and allows for this in designs, for example by having antennas both at the top and bottom of the phone and by careful selection of materials and their use in the mechanical design."

In this article: antenna, apple, design, iphone, iphone 4, Iphone4, nokia, performance, reception, rf, signal
All products recommended by Engadget are selected by our editorial team, independent of our parent company. Some of our stories include affiliate links. If you buy something through one of these links, we may earn an affiliate commission.
Share
Tweet
Share