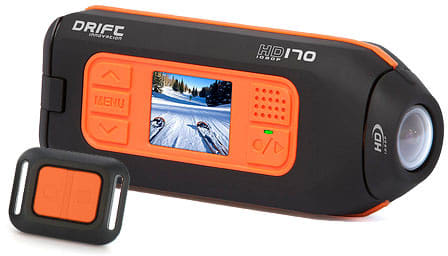 What's this, another way to capture for posterity the extremeness of our helmet-requiring pastimes? Yes indeed, a new player has entered the increasingly crowded POV/action/helmet camera market, the Drift Innovation HD170, offering 1080p recording in a durable case that stands poised to take on GoPro's HD Hero and VHoldr's ContourHD 1080p. However, the built-in color LCD here lets you do something you just can't do on either of those two: check your footage on the camera itself. Does this make up for some of the cam's other shortcomings? Read on to find out.

How would you rate the HD170?
We want to hear what you think. Post a quick review now to join the conversation!
Write a review

First thoughts on unboxing the HD170 is that this is one big mamma jamma -- relatively. It's about two full inches longer than the ContourHD and easily dwarfs the GoPro HD. It's the heaviest of the three, too, weighing in at 175g compared to the ContourHD's 127g and the GoPro's 100g. However, throw the GoPro into its polycarbonate case, which is required for mounting, and that jumps up to 169g so the difference between those two is minimal. However, the extra weight between this and the ContourHD is magnified when it's attached to your head, and the HD170's size makes it a little tricky to mount in some tight areas. Its size and styling also makes it hard to miss, despite a design that has a lot in common with the rather more stealthy ContourHD.

Like VHoldr's offering, this camera is long and narrow, rather more aerodynamic than the tiny toaster design of the GoPro. It also offers the rotating barrel of the ContourHD, meaning regardless of the mounted angle of the camera at you can easily ensure a perfectly vertical image. This makes mounting on angled handlebars easy, a feature made even more useful by the integrated LCD, something neither of the others offer. Despite its First Class Forever size the screen is hugely handy... sometimes. If you're mounting on a rollbar or frame or the like you can turn on the cam and instantly tell whether you have it oriented just right. However, if you have the thing mounted on the side of your lid you'll still have no idea what you're filming until afterward. For this situation we still prefer the ContourHD's laser sights.

The LCD also means on-device reviewing of footage, so that you can ensure every moment of your last yard sale was captured in glorious detail, and provides a helpful UI for changing resolution, exposure, and other settings on the camera. This is a definite improvement over the clunky button presses required on the GoPro and the inability to tweak much of anything in the field with the ContourHD.

Flip open the back and you'll find room for the 1110mAh battery, an SDHC card, a miniUSB connector, and a second connector for the included component/composite video and audio outputs -- unfortunately no HDMI. Also included in the box are mounts for attaching to a helmet, affixing to goggles, clamping onto handlebars, or strapping on to just about whatever you like. There's no suction cup mount on offer, but the sliding clip mount on the bottom unscrews from the body, leaving a standard, threaded receiver which you can use to attach just about anything you like -- no proprietary adapter required.

Finally, there's the remote control. Unlike the one on the Tachyon XC it is not infra-red, meaning you don't have to worry about line of sight. And, you can even strap it onto your wrist. Nice.


The novelty of having a camera strapped to your head has largely worn off, so if that noggin-borne device doesn't capture good-quality footage it simply isn't worth having around. The HD170 records at a maximum of 1080p30 at about a 12MBps bitrate, matching the resolution and frame rate of the other two here with a quality that's comparable as well. We filmed most of our footage on an unfortunately overcast day, not ideal conditions for these tiny sensors, but the HD170 delivered footage very close to the other two in terms of ultimate brightness and color reproduction.

Our initial tests revealed what appeared to be some excessive jelly vision, a CMOS-specific issue that we quite often see on DSLRs like Nikon's D5000. It's an issue caused by the sensor not capturing the entire scene at the same instant, which can appear to compress, stretch, or shift the resulting image as the camera moves. When mounted firmly onto the chassis of a race car or the handlebars of a motorcycle and subjected to vibrations, the image here does suffer some funky distortions. However, testing the competition's cameras using similar mounts proved video quality to be comparable -- they all have a little jiggle going on.

However, they don't compare when it comes to audio quality. We've already lambasted the ContourHD for its excessive wind noise and praised the GoPro for its clear sound seemingly regardless of speed. The HD170 doesn't match the other two, distorting sound at any speed as if it were recording underwater. The deep rumble of a motorcycle exhaust is turned into an odd high-pitched squeal. Like on the ContourHD you can adjust the mic sensitivity based on your racing situation to help out, and while that did help to reduce the wind noise, it didn't help to reduce the overall audio distortion.

This is probably due to the camera's "waterproof" nature and, while we hate to use unnecessary quotes, in this they feel appropriate because the HD170 is rated to survive a mere half-meter plunge. In other words: getting splashed with mud is probably okay, but whatever you do don't trip into a kiddy pool.

At $329.99 the HD170 is a bit of a hard sell compared to the competition. That's $30 more than the ContourHD 1080p or GoPro HD Hero, either of which are available for $299 (or less, if you shop around). It's certainly nicer and easier to use than the GoPro, thanks that camera's clunky exterior case and two-button menu system, and it offers comparable video quality to the competition -- if you left room for Jell-O. But, it's considerably larger and somewhat heavier than the other two and, while it does come out of the box with more flexible mounting options, at the end of the day it finds itself attached to a third place out of this trio.

Update: This review originally and incorrectly stated that the HD170 suffers from excessive "jelly vision" effect compared to the competition. Further testing has revealed that to not be the case. We've updated the text and added a new video. Also, the folks at Drift have passed on a few additional videos to share.

And here's another biking video, this one helmet-mounted. In this case the neck absorbs much of the bumpiness and so the jelly effect is definitely reduced compared to a rigid frame-mount. If you'll be using it mounted on your lid the problem is much less of a concern.