The moodiness of the US, as told by Twitter 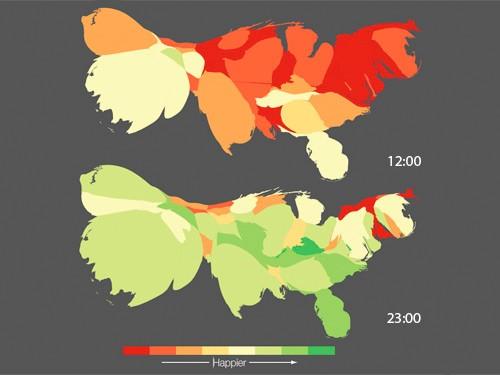 Twitter, of course, isn't the be all and end all for tracking the mood of a population (not yet, at least). Still, it's worth studying, and if nothing else, it produces interesting observations. A team of researchers from both Northeastern University and Harvard collaborated to analyze some 300 million tweets from September 2006 to August 2009. Using geographical data and past work in word / emotion association, the group has produced preliminary results and (arguably just as important) pretty graphs. The findings are presented by cartogram evolving over time -- weekends and weekdays are currently lumped together but will be separated later. Unsurprisingly, west coast moods follow the same pattern as the east coast, only three hours behind, but it is interesting to note that they also don't hit the same lows. Consider it some food for thought, and if you take offense, maybe you should spend more time looking at the bright side of life and gloating about it online. Hit up the source for more data and after the break for video.

In this article: anew, emotion, emotions, harvard, internet, mood, moods, nort eastern university, NortEasternUniversity, twitter, video
All products recommended by Engadget are selected by our editorial team, independent of our parent company. Some of our stories include affiliate links. If you buy something through one of these links, we may earn an affiliate commission.
Share
Tweet
Share