J. Stern
August 3rd, 2010
In this article: ati, ATI Mobility Radeon HD 5650, ATI Radeon, AtiMobilityRadeonHd5650, AtiRadeon, beats, Beats Audio, beats by dr. dre, BeatsAudio, BeatsByDr.Dre, Core i5, Core i5-450M, CoreI5, CoreI5-450m, envy 14, Envy14, hp, HP Envy, hp envy 14, HpEnvy, HpEnvy14, laptop, laptops, review
The HP Envy 14 is like the final revision of a C+ term paper that always had potential, but just needed an bit of extra information and refinement to get an A. In fact, when HP introduced the Envy 14, the company was rather blunt about the fact that many of the issues that plagued the original Envy systems had been addressed, including the lack of an optical drive and backlight keyboard, the frustrating touchpad and the heat caused by the Core i7 processor. On paper, the 14.5-inch Envy 14 has everything we wanted to see in those first models while still maintaining its beautiful yet tough etched aluminum chassis. It's also got a new lower $999 starting price, though our review unit rang up at $1,290. So, has the Envy 14 finally make its way to the head of the class? We've spent some quality time with the rig to find out. %Gallery-98777%
HP 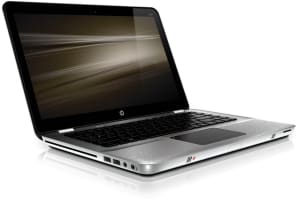 The Envy 14's smaller screen makes it slightly narrower than the 15.4-inch Envy 15, but other than that it's pretty much a replica of the previous laptop. And we've got absolutely no problems with that, considering we found the original Envys to be two of the most downright stunning laptops to ever grace the earth. There's still no denying that the all-aluminum body and curved edges are reminiscent of Apple's unibody MacBooks Pro, but as we said in our Envy 15 review, HP's take is a bit more daring with its textured dark metal lid and palmrest. The little divots in the lid create a subtle swirly pattern that can only really be seen when standing at a distance. Still, the curved metal edge that runs around the laptop comes to a rather sharp edge, and like the MacBook Pro, it can be slightly uncomfortable when your wrists lay across it.

The Envy 14 is solid to the bone – seriously, the build quality is fairly remarkable for the price -- and even better, it's not all that heavy for a 14.5-inch machine. At 5.2-pounds, it's .4 pounds lighter than both the MacBook Pro and HP Pavilion dv5. The 1.09-inch thick system does have room for some added ports as well – it's got two USB ports, an eSATA / USB combo port, HDMI, DisplayPort, Ethernet, and two headphone jacks, one of which double as a mic jack as well. It's still peeving that there's no VGA port, but you can pick up an HDMI to VGA cord from HP for $50, or from Amazon for around $20. A two-in-one card reader dwells on the front lip of that laptop, while the left side makes room for a slot-loading optical drive. HP opted to exclude a Blu-ray option on the 14-inch system because of its size -- HD disc seekers have to head for the Envy 17.

The Envy 14's soft coated chiclet keyboard, like that of the previous Envys and the Pavilion dm4, is a pleasure, and we mean a real pleasure, to type on. And now that you can turn on the backlight in dim lighting, we really can't praise the feel of the squared-off keys enough. Come to think of it, it may rival the ThinkPad Edge's keyboard as our favorite out there.

And now the million-dollar question: has HP improved its single-buttoned ClickPad, to the point where it doesn't ruin the rest of the premium Envy experience? The answer, dear readers, is yes, although it's still got issues. The good news is that the pad itself is quite wide, making navigating and double tapping to make selections easy. The bad news is that we much preferred to click using the double-tap because we had repeated issues with the physical buttons. Just like we've noticed when using the pad on the Pavilions, if our thumb crosses over the left mouse button line, which it does every so often, we lose all control of the cursor and it jumps all over the screen. We're not fans of having to adjust our thumb on the button, but assume that users will get start to get used to the positioning over time. The multitouch gestures have also been improved -- two-finger scrolling was responsive for the most part as was pinch-to-zoom.

The 14.5-inch, 1,600 x 900-resolution display is a breath of fresh air compared to the laptops we've recently reviewed. Not only is the resolution better than the 1366 x 768 displays we've been staring at lately, but the quality of the flush glass LCD is miles better than the others HP's used lately. A lot of that has to do with the HP Radiance Infinity LED panel, which was also on the Envy 13. The 350nit display has a higher color gamut than other displays, and you notice the difference upon first boot -- even the blue of the Windows Start button sticks out more than on other screens. Viewing the Tron: Legacy trailer was a pretty stunning experience with the blue glowing lasers appearing extremely detailed. Even better when we tilted the screen backwards, we were still able to make out Garrett Hedlund's face, and similarly when we moved to the size of the screen we could the moving images. It always feel good to take a break from complaining about poor LCDs and viewing angles. We do have to say the display is rather glossy, and when turned off it could have your mirror worried about losing its job.

That sweet visual experience is met with an equally awesome audio experience. To start, the speakers on the front edge of the laptop are seriously loud and full. However, HP's also teamed up with Beats Audio to provide a high end hardware and software-based audio-out experience. When we plugged our Sony MDR7506 headphones into the audio jack we could immediately hear the difference between listening to Eminem's "Not Afraid" on the Envy and our MacBook Pro. The fuller and more detailed sound was also obvious when we turned off the Beats option in the software controller.

The Envy 14 is just as strong internally: our review unit was powered by a 2.66GHz Intel Core i5-450M processor, 4GB of DDR3 RAM and a 500GB 7,200rpm hard drive. It was also coupled with an ATI Mobility Radeon HD 5650 GPU with 1GB of VRAM. The processor and RAM alone pushed out some of the best benchmark scores we've seen in quite a while, which translated to very zippy everyday performance. Not only was the system extremely adept at handling our usual application load simultaneously – including Firefox, TweetDeck, Trillian, Microsoft Office, and Skype – but when we threw in Photoshop to edit a few pictures it didn't flinch or slow down. Also, those heat issues we complained about when we reviewed the Envy 15 have disappeared, for the most part. The keyboard and touchpad of the laptop stayed relatively cool during our usage, even while playing Flash videos. The bottom of the laptop did get a bit warm, but not to the point that we feared burning any reproductive organs. We've also heard some recent buyers complaining about fan noise, but we weren't bothered by it.

ATI's Radeon HD 5650 also topped a lot of the other laptops on 3DMark06. With its 1GB of VRAM, it pushed along a 1080p clip beautifully – though Intel's integrated solution is more than capable of dealing with HD content. When it came to gaming, the card helped KO the Joker's crew at 33fps in Batman: Arkham Asylum. We also downloaded a demo version of World in Conflict on Steam, and at medium settings it clocked in at over 40fps. The graphics performance is pretty good for a mid-range card and it can support a killer Eyefinity setup if you happen to have six monitors, but we can't help but think a solution like NVIDIA's Optimus would be nice on this sort of machine – a few times when we unplugged it wouldn't switch to the integrated graphics until we closed some programs, and we had to go into the graphics control panel to turn on the GPU when we wanted to play some Batman when running on battery power.

Speaking of the battery, the Envy 14's 3800mAh eight-cell battery lasted three hours and 51 minutes on our video rundown test, which loops the same standard definition video at 65 brightness. For a laptop of this size, that's not bad by any standard, and when writing this review and surfing the web (listening to Pandora and checking e-mail, really) we got about four and a half hours or runtime. HP does offer an extra battery slice for a whopping $200, which attaches to the bottom of the laptop.

We've knocked HP quite a bit lately for preloading too much software, and most of it's still there on the Envy 14 -- HP's just hidden it better. As you can see above, the desktop comes pretty bare, but buried in the Start Menu is a link to Barnes & Noble's Desktop eReader, Norton, and HP's browser toolbar. We don't need to tell you that the browser toolbar that's adorned with HP links and shortcuts was one of the first things to go. HP also has its own software, including its QuickWeb instant-on OS and MediaSmart media panel.

Turns out, our fifth grade teacher was right: with careful revision and a bit more attention to details a once mediocre product can be turned into one of the best around. The Envy 14's superior build, head-turning design, great audio, beautiful display, and powerful organs makes it well worth $999 – and even $1,290 for our review unit's configuration. Our complaints are really limited to the extra software and the learning curve required to use the touchpad, and well, that's really not all that much compared to the list of things we truly love about this 14.5-inch laptop.
All products recommended by Engadget are selected by our editorial team, independent of our parent company. Some of our stories include affiliate links. If you buy something through one of these links, we may earn an affiliate commission.