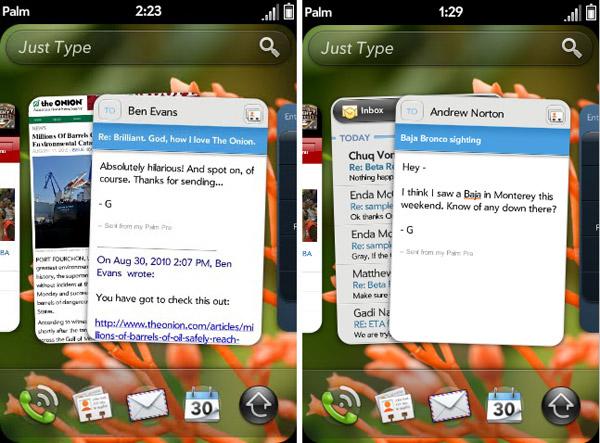 Palm fans, get your party hats on. Today the company is announcing the beta release of its SDK for webOS 2.0, which means we're getting dangerously close to a proper 2.0 release for devices. And who knows... maybe the phone-maker will decide to throw a new device our way to go along with the OS. But let's not get ahead of ourselves. Starting tomorrow, a select (though rather wide, says Palm) group of developers will be able to start toying around with the latest and greatest SDK for the company's mobile operating system, and it looks like the new software brings some tasty morsels to the table that you're definitely going to want to chow down on. We got the scoop directly from Palm on just exactly what kind of changes you'll be seeing in the first version of 2.0, and we've rounded them up in a neatly digestible form below, so read on after the break and get the full story.

We'd be lying if we told you we weren't excited to see what kind of other front-facing features Palm comes up with for this release, and if we do get to see it coupled with a new, powerful handset (or a tablet or two), we think we could definitely find our interest in Palm rejuvenated. C'mon guys -- you've got the cash and resources now -- go big.
In this article: palm, palm webos 2.0, PalmWebos2.0, sdk, sdk 2.0, Sdk2.0, web os, web os 2, web os 2.0, web os sdk, WebOs, webos 2, webos 2.0, webos sdk, webos sdk 2.0, Webos2, Webos2.0, WebOsSdk, WebosSdk2.0
All products recommended by Engadget are selected by our editorial team, independent of our parent company. Some of our stories include affiliate links. If you buy something through one of these links, we may earn an affiliate commission.
Share
Tweet
Share