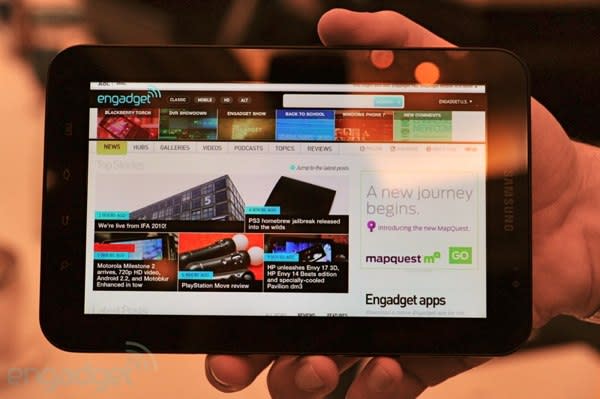 After a week of painful teasing, Samsung has come clean about its Galaxy Tab 7-inch Android tablet. We got the nitty gritty specs, along with some quality time with the device, and we like what we're seeing on both fronts. Follow along after the break as we break it all down, including some hot hot video of the thing in action! 
London, UK, September 2, 2010 – Samsung Electronics Co., Ltd, a global leader in mobile technology, today announced the launch of the Samsung GALAXY Tab (GT-P1000). Powered by the Android Operating System 2.2, the GALAXY Tab is the first of the company's tablet devices, representing a new category of mobile products for Samsung.

The Samsung GALAXY Tab brings together all of Samsung's leading innovations to provide users with more capabilities while on the move. Consumers are able to experience PC-like web-browsing and enjoy all forms of multimedia content on the perfectly sized 7-inch display, wherever they go. Moreover, users can continuously communicate via e-mail, voice and video call, SMS/MMS or social network with the optimised user interface.

"Samsung recognises the tremendous growth potential in this newly created market and we believe that the Samsung GALAXY Tab brings a unique and open proposition to market. There is a new and emerging consumer demand that Samsung can satisfy since mobile is in our DNA. This demand continues to grow and develop as users tap its limitless potential," said Simon Stanford, Head of Mobile, Samsung UK and Ireland. "The Samsung GALAXY Tab has been designed to enable consumers to maximise their online experience wherever that may be. The Samsung GALAXY Tab is pushing the market in new directions and Samsung believes this is only the beginning of its innovations as pioneers in smart media devices."

A new concept of mobility for media

As a new category of device, the Samsung GALAXY Tab brings a wealth of mobile experiences. Its striking 7-inch TFT-LCD display delivers exciting mobile experience for watching films, viewing pictures, e-reading or sharing documents. In design, its light (380g) build provides perfect portability, with its svelte dimensions making it easy to grip and use. Supporting the latest Adobe Flash Player 10.1, the Samsung GALAXY Tab fully supports swift, seamless viewing of every single page of the web.

The 'Readers Hub,' Samsung's unique e-reading application, provides easy access to a vast digital library – from classical literature to the latest bestsellers and reference materials. At the same time, Samsung unveils 'Media Hub,' a gateway to a world of films and videos, and 'Music Hub,' an application giving access to a wide range of music tunes.

The Samsung GALAXY Tab has made rich communication truly mobile; it presents a level of converged technology that moves beyond mobile or PC to an entirely new category. Users have new powers to consume, create and communicate from wherever they are.

With 3G HSUPA connectivity, 802.11n Wi-Fi, and Bluetooth® 3.0, the Samsung GALAXY Tab enhances users' mobile communication on a whole new level. Video conferencing and push email on the large 7-inch display make communication more smooth and efficient. For voice telephony, the Samsung GALAXY Tab turns out to be a perfect speakerphone on the desk, or a mobile phone on the move via Bluetooth® headset.

Powered by a Cortex A8 1.0GHz application processor, the Samsung GALAXY Tab is designed to deliver high performance whenever and wherever you are. At the same time, HD video content is supported by a wide range of multimedia formats (DivX, XviD, MPEG4, H.263, H.264 and more) which maximises the joy of entertainment.

While a front-facing camera allows for face-to-face video telephony over 3G, a rear-facing camera captures still images and video that you can edit, upload and share, all without any hassle. As online content and creativity explodes, the Samsung GALAXY Tab is the best portable solution for every lifestyle that needs a constant connection.

The Samsung GALAXY Tab will be launched in the UK in the coming months.

2) Applications of the Samsung GALAXY Tab

The Samsung GALAXY Tab is packed with services to complement and enhance your life in different ways. Access to Android Marketplace lets users download apps and personalise their device infinitely. In addition, there are pre-loaded applications uniquely designed and optimised for Samsung smart phones and smart media devices.


· Readers Hub – Samsung Readers Hub consolidates e-reading applications such as eBooks, magazines, and newspapers. Users can enjoy 'reading' with unified and intuitive user experience, powered by global eReading service leaders, Kobo, PressDisplay and Zinio. More than 2 million books including today's best sellers, over 2,500 titles of magazines in 20 languages and more than 1,600 newspapers in 47 languages are available at launch and will grow the library gradually.

· Google Mobile Services – Services like Google Maps™ Navigation (Beta) and Google Goggles are available on Google's Android platform. With useful location-based services like Google Maps, consumers can search in Standard English instead of entering an exact address. A search-by-voice function is just as intuitive, meaning searches can also be completed easily on the go. Google Goggles is a powerful, visual search tool that uses the Samsung GALAXY Tab's camera to uncover information – an image of a landmark or artwork is automatically used to perform a search, delivering relevant content like a description or history. In addition, with a camera, users can enjoy various augmented reality services which are downloadable in the application market.


· More applications will be available from Samsung Apps.

Lots of question marks. The tablet will be out in Europe first, possibly with Italy as the first to nab it, and the US will come later down the line. Also, while the version we played with is obviously GSM, we don't have any confirmation on a CDMA version, or which carriers might be scoring the device on either side of the pond. We're also completely in the dark on price.

There's hardly a surprise to be had when it comes to the hardware. It's good looking (though a tad on the "safe" side), solidly built (none of the seeming fragility of the Galaxy S here), lightweight (but not Kindle light), and glossy to the max (your iPad would be proud). The screen is great, though Samsung has managed to make this LCD look just as oversaturated as its AMOLEDs, and we're particularly enthused at the relative pixel density the screen gains over its iPad competition and the multitude of WVGA 7-inch Android tablets out there. Capacitive touch response is just as excellent as the iPad's, and the processor doesn't seem to have much trouble keeping up with the UI. There is a feeling of relative chubbiness due to the screen to thickness ratio, despite the fact that the Tab is just as thin or perhaps thinner than the iPad -- we suppose the new Kindle has terminally spoiled us on this front. Still, it's a device that's much better suited to supporting with a single hand than the iPad, and seems to squarely best that competitor when it comes to all things e-reading.

By all accounts Android isn't really "ready" for tablets. It's still a phone OS being asked to do a big screen job, but while we could see room for improvement, we'd say Samsung has shored up enough of Android's deficiencies with its own custom skin and apps to make the OS thoroughly palatable in this form factor. TouchWiz 3.0 still does have a bit of a "iPhone for kids" flavor to it, but props to Samsung for the depth and consistency of its UI layer.

What's more impressive are the apps Samsung built specifically to take advantage of the screen size and resolution, including a very attractive calendar app, an email app that has a dual pane view in landscape (of a style that seems unapologetically borrowed from the iPad), a similar messaging app, a Media Hub music store and player (not aimed at the US, most likely), an e-reading launcher app (that points to PressDisplay for newspapers, Kobo for e-books, and Zinio for magazines), and more. A custom dialer app includes fancy contact browsing and a video call button right up front. Samsung supports the UMTS video calling standard, but since that's not a thing in the US, we'll have to look to third party providers such as Qik to get our video calling on.

On the third party front, Samsung says that apps which were developed within Google's UI guidelines should scale up correctly, but others might need to be reworked. We'll have to see for ourselves how well Joe the Plumber's apps handle the new resolution, but we don't have much reason to fear it so far -- the few apps we saw that looked to be scaled up instead of 1024 x 600-specific looked and worked just fine.

We'll have to see if a non-Apple company can convince consumers to buy something once viewed so frivolous as a tablet, and the true usefulness of Android in this form factor will require more time with the Tab to really discern. A lot rests on the shoulders of developers, as usual, to make or break this quasi-new platform, but for Samsung's part we think the company has set the gold standard for Android tablets, and might have just enough differentiation, quality, and moxy to set its 7-inch contender up against Apple's 9.7-inch juggernaut.
In this article: android, android 2.2, Android2.2, froyo, galaxy, galaxy tab, GalaxyTab, impressions, preview, samsung, samsung galaxy tab, SamsungGalaxyTab, tab, tablet, touchwiz, touchwiz 3.0, Touchwiz3.0, video
All products recommended by Engadget are selected by our editorial team, independent of our parent company. Some of our stories include affiliate links. If you buy something through one of these links, we may earn an affiliate commission.
Share
Tweet
Share