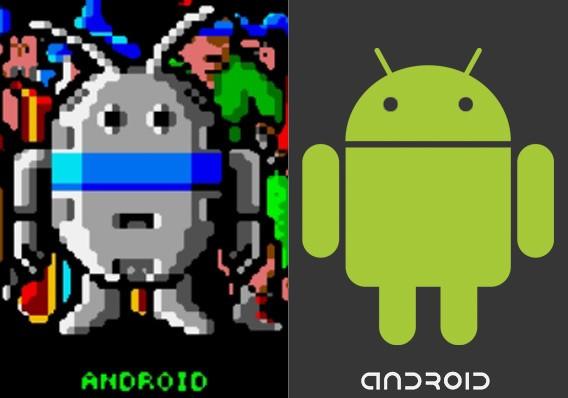 Back in the early 90's whilst playing our Atari Lynx -- friendless and alone, of course -- we couldn't have imagined that a second-rate spinoff of the popular Gauntlet franchise would unlock the secrets behind the birth of Google's Android OS. But, lo and behold, what has one of our faithful tipsters found down here, amongst the ruins of Gauntlet: The Third Encounter? That's right, nearly irrefutable proof that the Android team (or at least its graphic designers) have plumbed the depths of Epyx's not-quite-masterpiece for the iconic droid logo we've come to know and love. Sure, the top-down scroller provided all kinds of new character classes like the "Nerd," "Punkrocker," and "Pirate," but only one of these fresh faces would provide the blueprint for Android's public face. It's hard to argue that there isn't some level of appropriation here, given the multiple similarities between the two pieces of art, right down to the antennae, dotted eyes, general size and shape, and even the strip which cuts across the midsection of the bot. Oh yeah, and the character is named Android. We personally would like to hear what Google has to say for themselves in regards to this blatant theft of intellectual property, and as for the Epyx artists who slaved over a hot Amiga to bring this image to life -- the taste of sweet justice is yours.


[Thanks, Davey]
In this article: android, android logo, AndroidLogo, art, atari, atari lynx, AtariLynx, exclusive, gauntlet, gauntlet: the third encounter, Gauntlet:TheThirdEncounter, google, google android, GoogleAndroid, iconography, icons, logo, logos, lynx, shocker, video
All products recommended by Engadget are selected by our editorial team, independent of our parent company. Some of our stories include affiliate links. If you buy something through one of these links, we may earn an affiliate commission.
Share
Tweet
Share