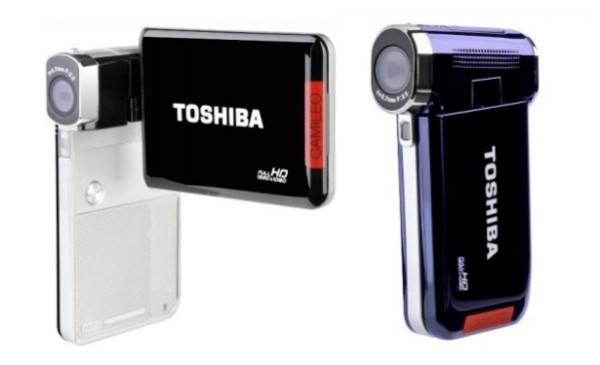 Toshiba's launching some new Camileo pocket HD camcorders at IFA, and hey -- just like everything else in the world, they've sprouted three-inch touchscreens. Both offer 1080p recording and 10x digital zooms with HDMI out and support for 64GB SD storage; the £139 ($214) S30 comes in a more standard form factor that's 19mm (.7 inch) thick and features eight megapixel still photos, automatic exposure control and image stabilization, while the £119 ($183) P20 comes in a pistol grip package and takes five megapixel stills. The P20 will hit in October, while the S30 is set to arrive in January, so it makes perfect sense for Toshiba to announce it now, in September. PR after the break.

Show full PR text
Neuss, Germany, 2nd September 2010 – Toshiba Europe GmbH today presents two new digital H.264 camcorders: Both the CAMILEO P20 and CAMILEO S30 come with Full HD resolution and are designed to be as user-friendly as possible: They also both feature a large (7,6cm/3") touch sensitive screen that displays an easy-to-use graphical user interface. While the CAMILEO P20 offers a photo resolution of 5 Megapixel, the CAMILEO S30 is equipped with an 8 Megapixel CMOS sensor. The two new camcorders will be available in the third quarter 2010 throughout Europe, Middle East and Africa.

CAMILEO P20: designed to capture unforgettable fun
A walk in the city, a party with friends or a day at the seaside: everyone wants to save those memorable times - quickly and easily. Designed for the early-adopting, young and fashion-conscious, the trendily deep blue coloured CAMILEO P20 offers high quality and reassuring reliability at an affordable price. With a weight of only 151 g the pistol-type camcorder can be carried on a hand strap and is always at hand to capture those spontaneous magic moments.

CAMILEO S30: the smart companion, always ready for adventure
At only 19mm thick, Toshiba's CAMILEO S30 is the ideal handy companion for travelling and sports, for active and adventurous young people, as well as being ideal for capturing precious family memories. The CAMILEO S30 will be available in deep blue, burgundy red, raspberry and silver. With ease-of-use being top of the list, the CAMILIEO S30 offers a choice of eight scene support selections designed to achieve perfect results even in difficult light conditions, these include "skin", "night", or "back light" to name just a few.

High photo and video quality
CAMILEO P20 and CAMILEO S30 both are fully equipped high-quality camcorders and digital still cameras. A 10x digital zoom allows for far-off shots in video and photo mode. For perfect shudder-free shots, the camcorders offer an embedded video stabilisation. The embedded software can even interpolate the photo resolution up to 16 Megapixels.

Capture the moment...and then easily share with friends
To easily share clips and photos the CAMILEO P20 and CAMILEO S30 offer a broad range of connectivity tools: Via HDMI, miniUSB.2.0 or composite video they can be quickly and easily connected to TV sets and other digital devices. Plus, they come with a card slot for SD / SDHC / SCXC cards with a capacity of up to 64GB. Thanks to the user-friendly upload functionality, users can easily upload their videos to video sharing sites such as YouTube™ and share their photos with friends on websites like Picasa™ Web Albums.
In this article: camcorder, camileo, camileo p20, camileo s30, CamileoP20, CamileoS30, ifa 2010, Ifa2010, p20, pocket camcorder, PocketCamcorder, s30, toshiba
All products recommended by Engadget are selected by our editorial team, independent of our parent company. Some of our stories include affiliate links. If you buy something through one of these links, we may earn an affiliate commission.
Share
Tweet
Share