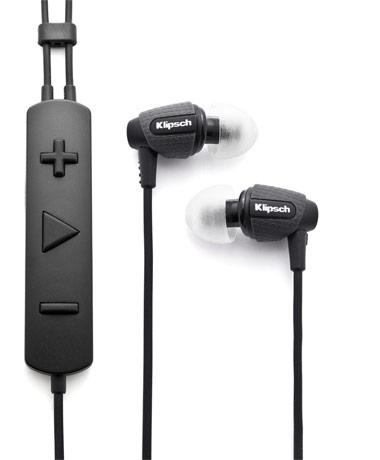 It's been awhile since we sashayed through Klipsch's world headquarters back in December of last year, but the company certainly hasn't let off of the pedal. Today at IFA, it managed to introduce no fewer than three new headphones, including the outfit's very first on-ear set. The Image One was built to bring Klipsch's signature sound to folks who'd prefer cans over 'buds, and it's also amongst the first to have an Apple-centric mic and three-button remote for controlling music playback on iPods, iPads and iPhones. Travelers will be pleased to hear that the ear cups fold flat for portability, but you'll need $149.99 to call 'em yours when they ship this November. Moving on, there's the Image S5i Rugged (shown above) -- essentially, you're looking at the same sound quality we lauded last year, but with a rugged slant. These feature the aforesaid three-button remote / mic as well as a "safety case" that touts a built-in flashlight. We're expecting a demonstration of their toughness at IFA tomorrow, but in the meanwhile you can start sacking away $129.99 for their November debut. Finally, the October-bound Image S3 is the company's new low-end set, priced at just $49.99 but still shipping with a trio of oval ear tips, a carrying case and a choice of gray, red, pink or green hues. The full presser is after the break, if you're into that type of thing.

INDIANAPOLIS (September 3, 2010) - In just three years, Klipsch has carved out a niche in the heavily saturated headphone market by manufacturing products designed to offer unequaled comfort, noise isolation and musical accuracy at any price point. Today, the company plans to build on its success with three new headphone models catering to cost-conscience consumers, athletes and people who prefer on-ear solutions.

Ranging from $49.99 to $149.99 (US MSRP), these headphones maintain the same high-quality sound signature and comfort levels as previous Klipsch headphones, but introduce enhancements in design, cabling, performance, packaging and accessories. These new models join the existing Klipsch headphone line, which includes the best-selling Image S4, Image S4i and Image X10i.

The Image One brings high-performance Klipsch sound to people who prefer an on-ear design. Not only is it the company's first on-ear headphone, it's among the first to feature an Apple-based mic and three-button remote for taking calls and controlling music on iPods, iPhones or iPads. Each lightweight, pivoting ear cup features premium leather and high-density memory foam for comfortable wear and superior passive noise-isolation, designed to block out ambient noise and provide enhanced bass. The ear cups fold flat for placement inside the included carrying case. Purchase these sleek headphones for $149.99 (US MSRP) at authorized retailers and klipsch.com in November.

These affordable in-ear headphones offer a major boost in sound and comfort over similarly priced competitor models. Available in a gun metal gray, red, pink or green finish, the Image S3 accommodates virtually any device with a standard 3.5mm headphone jack. It comes with three pairs of different-sized patented oval ear tips and a carrying case. Purchase the Image S3 for $49.99 (US MSRP) at select retailers and klipsch.com in October.

About Klipsch® Premium Speakers
For over 60 years, Klipsch has designed premium speakers for those who are passionate about great sound. Company founder Paul W. Klipsch started this legacy in 1946, and it continues today with owners Fred and Judy Klipsch. For over 20 years, Fred and Judy Klipsch have worked hard to maintain the family-owned company's rich heritage, while also staying committed to innovation and delivering the world's most powerful, detailed and emotional sound reproduction.
In this article: apple, audio, earbud, earbuds, headphone, headphones, ifa, IFA 2010, Ifa2010, Image One, Image S3, Image S5i, Image S5i Rugged, ImageOne, ImageS3, ImageS5i, ImageS5iRugged, Klipsch, rugged, s3, s5i, s5i rugged, S5iRugged, tough
All products recommended by Engadget are selected by our editorial team, independent of our parent company. Some of our stories include affiliate links. If you buy something through one of these links, we may earn an affiliate commission.
Share
Tweet
Share