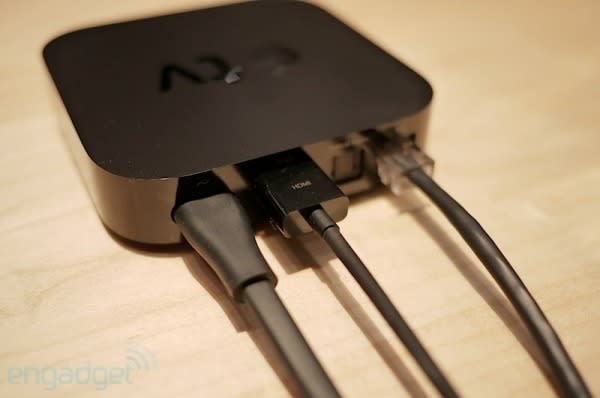 This week at what's become Apple's fall music event the company unveiled a revised Apple TV. The small $99 device delivers a new rental model and support for Netflix, but there are no apps, contrary to much of the speculation leading up the event. That's in stark contrast to the Google TV project announced at I/O last spring. Unlike Apple, Google is looking to provide DVR functionality, search, and an app marketplace. Some say Apple isn't being bold enough, but I think Apple might be right.

There's nothing wrong with Google's approach, except it's hard. Really hard. It's like trying to take the Russian front hard. In winter. No one's succeeded in the past nor are they likely to in the future -- and certainly not with any weapon that requires an IR blaster. The cable companies have a very firm lock on the cable box. They don't want to open it. They don't want to share it. They want to keep it to themselves. The last thing they're going to do is allow themselves to be commoditized by Google or anyone else. While I think Google TV will have some appeal with enthusiasts, it's too ambitious too soon and it's going to need some iterations quickly.


That's why I think Apple's approach makes sense. It's not a guaranteed win but it has a good chance of success. The DVD player is looking long in the tooth. The problem is that the TV experience has entrenched behaviors that won't change soon, and Apple needs to educate the consumer. Apple released the iPhone with no app marketplace at first to teach new ways of using a phone, and it's doing the same with this Apple TV reset (it's not even called Apple TV 2). Apple needs to get into the market, secure additional devices and services and slowly evolve the behavior of the consumer in the living room. With good positioning in Apple retail stores, some marketing and growing content deals Apple can slowly educate, evangelize and evolve the usage of connected TV. With a base to show to developers Apple can then safely unveil an SDK and get the developer machine in gear. With a solid position on input two Apple can safely do an end run around cable companies without having to make a direct assault. And from that position it's a lot easier to make a run at input one.

Apple's shown the ability to do the two things that will make Apple TV a success over time: engineer content deals once thought impossible and evangelize developers. What we saw this week is likely just the next step in the larger iOS platform play -- although the TV is the next battleground for connected screens and applications, the platform is what matters in the long term, and Apple should treat the battle for the living room as a marathon, not a sprint.

Michael Gartenberg is a partner at Altimeter Group. His weblog can be found at gartenblog.net. Contact him at gartenberg AT gmail DOT com. Views expressed here are his own.
In this article: apple, apple tv, AppleTv, column, columns, entelligence, google, google tv, GoogleTv
All products recommended by Engadget are selected by our editorial team, independent of our parent company. Some of our stories include affiliate links. If you buy something through one of these links, we may earn an affiliate commission.
Share
Tweet
Share