J. Topolsky
September 8th, 2010
In this article: 6th generation, 6thGeneration, apple, apple iPod, apple iPod nano, AppleIpod, AppleIpodNano, dap, digital audio, DigitalAudio, fall music event, FallMusicEvent, ipod, ipod nano, iPod nano 6g, IpodNano, IpodNano6g, mp3, mp3 player, Mp3Player, music, nano, nano 2010, Nano2010, review, video
Apple's sixth generation of the iPod nano is essentially the first complete rethinking the product has had since its debut in 2005. The previous form factor -- slim and light with a decently sized display and clickwheel -- has been all but abandoned. The new design is a complete departure; a full touchscreen device that brings to mind something more like a large, living postage stamp than a portable music player. Along with the radical hardware redesign, Apple has infused the media player with a brand new operating system as well -- an interface that looks and plays more like iOS than iPod. We've spent the past week or so knocking the nano around to see if it's worth your hard-earned dollars, and we've got the answers inside -- so read on for our full review.
%Gallery-101628%
Apple 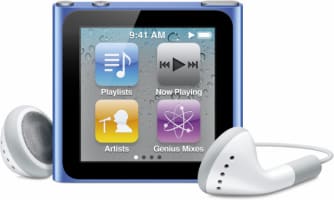 Size-wise, the iPod nano has never been smaller. The new hardware is slightly wider than the previous nano, but this time it's a tiny square, with a miniature, 1.54-inch 240 x 240 capacitive multitouch LCD display. Around back is a built-in clip, and the whole affair is encased in the same kind of anodized, colored aluminum you've come to expect from an iPod nano. In case you're wondering, this particular model can be had in seven different colors -- which weirdly makes us think that Apple believes someone out there will get one for every day of the week. Though the previous generation device sported a video camera, that's been ditched in the new model along with the physical controls. Anyone who's spent a lot of time on the go with the nano will probably be happy about these changes -- the clickwheel could be a bit hard to navigate with accuracy, say, when jogging.

Other than that, the new nano is considerably lighter than the previous model, weighing in at roughly 21 grams, whereas the older version clocked in at about 36g. In fact, it's so light that when using the clip to attach it to a shirt (or in our case, the strap of a bag), you barely notice it hanging there at all.

The nano boasts just three hardware buttons -- one larger button on the top right for power / sleep, and two smaller, circular ones on the top left for volume controls, another change we appreciate. In the previous nano, in order to adjust the volume you had to unlock the device then navigate with the wheel. Now with actual hardware buttons, you can turn the volume up or down without ever actually looking at the player. It's a minor but welcome improvement. If these buttons are a byproduct of Steve Jobs hating buttons, we like it.

While that screen is small, it's not hard to get around in, and the touch response seemed about as tight as it is on the new touch or iPhone. Multitouch rotation worked just fine, and in general use, moving from place to place with the new nano was considerably faster than on previous models.

Overall, we think the design is a big step forward for this line of players. Eschewing the staid clickwheel for a simple touchscreen interface is a big plus in our book, and the high-end feel to the materials and build quality makes this seem right at home next to something like the new iPhone. Of course, at this size, you're far more likely to lose this thing -- and the price tag will make that sting a bit more than if you misplaced a shuffle.

The iPod nano's strongest suit has always been its simplicity of purpose, and that's never been more evident than in this newest device. If there was ever confusion for buyers about whether to get a nano or something more full-featured, such as the touch -- that argument is dead. Apple's ditched the video camera and the ability to play back video here, along with lots of other "extra" stuff (contacts, calendars, notes, games). With the new nano, you can listen to audio and look at photos -- and that's it.

The new interface is far more intuitive than the classic iPod interface, in our estimation. Though you have just as many playback and sorting options as before, the multitouch, iOS-ness of the experience strips away the feeling of endlessly scrolling through menus (often without context) to get to what you're looking for. The new UI looks and acts just like iOS, but according to Apple the nano is not actually running a build of iOS. We know that previous iPod UIs were built using a handful of components from OS X, so it's safe to assume that this new interface is made up of a hodgepodge of tried and tested frameworks. The results are great -- the nano feels like iOS in all the ways that matter (so much so that we mistakenly call it a "phone" in the video below), including inertial scrolling, the ability to rearrange your homescreens, and general navigation throughout the device.

Getting around the UI is similar, though not exact, to iOS. To navigate you flip through a couple of pages of iPhone-style icons. It's like a micro Springboard. You can hold down on an icon to put it into "jiggly mode," and then move the icons as you would in iOS. When you're using one of the functions of the device, you can long press on the center of the screen to return to your homescreen; swiping to the right when you're listening to music or viewing photos will take you back through your previous screens until you land on home. Lists are scrollable and multi-tiered just like in iOS. There is the occasional hidden dialog in some places that we found odd, like where Apple placed the "add" and "edit" buttons for playlists -- they're unexposed at the top of your playlist screen, and require a scroll up to discover.


Long lists of songs, artists and albums are still present here, but the new interface has streamlined a lot of actions in a way that makes the nano feel much neater than previous models. Dedicated icons for podcasts, the FM radio (a feature we're glad was held over from the last generation), voice recorder (as long as you've got earbuds with a mic plugged in), and the fitness functions make getting to what you need to easy even when you're not fully paying attention -- which is a great advantage of graphic, rather than text-based, menus. There are also tasteful little tweaks too, like being able to set the default lock screen of the nano to an analog clock. We're sure there will be a slew of aftermarket armbands for this -- and honestly, it does make kind of a cool looking watch.

Oh, and you can use multitouch to rotate the screen to whatever orientation you like, but there's no multitouch in the photos application. You can double tap to zoom in, however.


Sound quality seems to have improved a bit over the last generation, as well -- though we can't be scientifically positive, it sounds to us like Apple's made some iterative improvements here. Bass felt full and deep, and highs were less cutting than on most players we've used, though the Zune and Walkman sound quality are tough to beat in this category. Still, for a player of this size and price point, the nano performs excellently.

Ultimately, if you've had the same iPod nano for the past few years, this new device will probably make you feel like you need a replacement. While there isn't slew of fresh additions (in fact, there are notable subtractions), the re-think about what the nano is supposed to be feels right to us. It's still not exactly your cheapest option if you're looking for pure MP3 playback, but something tells us that if you're looking at the nano, you're living in Apple's ecosystem, and that makes this a pretty attractive choice. We ultimately would like to see the capacities on these guys grow a bit, and those prices drop, but there's no sticker shock here. The new nano is a smart, fast, capable player that should please a lot of people looking for something new this holiday season.
All products recommended by Engadget are selected by our editorial team, independent of our parent company. Some of our stories include affiliate links. If you buy something through one of these links, we may earn an affiliate commission.