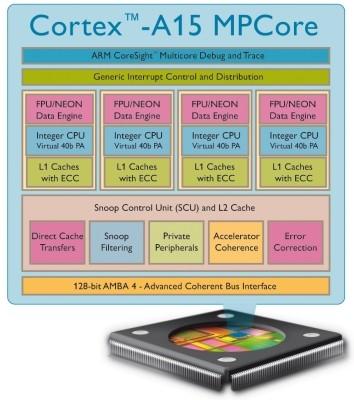 Way to take the wind out of our sails, ARM -- no sooner does your dual-core Cortex-A9 finally ship, do you reveal an even more powerful smartphone, smartbook and server-slaying beast. The Cortex-A15 MPCore picks up where the A9 left off, but with reportedly five times the power of existing CPUs, raising the bar for ARM-based single- and dual-core cell phone processors up to 1.5GHz... or as high as 2.5GHz in quad-core server-friendly rigs with hardware virtualization baked in and support for well over 4GB of memory. One terabyte, actually. Like we'd heard, the ARMv7-A "Eagle" chips are destined for Texas Instruments, but ST-Ericsson and Samsung as also named as "lead licensees," so we fully expect to see some badass silicon powering a Galaxy when the 32nm and 28nm parts ship in 2013. Press release and video after the break, replete with ARM partner companies fawning over the new hotness. We can't really blame them.

CAMBRIDGE, UK– SEPT 8, 2010 – ARM today introduced the Cortex™-A15 MPCore processor that delivers a 5x performance improvement over today's advanced smartphone processors, within a comparable energy footprint. In advanced infrastructure applications the Cortex-A15 processor running at up to 2.5GHz will enable highly scalable solutions within constantly shrinking energy, thermal and cost budgets. The Cortex-A15 processor is available for licensing today and is targeted at manufacture in 32nm, 28nm, and future geometries.

As the latest addition to ARM's Cortex-A family of processors, the Cortex-A15 MPCore processor will enable a new and vast array of products ranging from next-generation smartphones, tablets, large-screen mobile computing and high-end digital home entertainment devices through to wireless basestations and enterprise infrastructure products.

"The launch of the Cortex-A15 MPCore processor marks the beginning of an entirely new era for the ARM Partnership. It brings together more than 20 years of ARM expertise in low-power design with a host of new and very aggressive high-performance technologies," said Mike Inglis, EVP and GM, Processor Division, ARM. "The Cortex-A15 MPCore processor will become the next major step along the industry's energy efficient computing roadmap and open up a wide range of new application possibilities for our Partners."

The debut of the Cortex-A15 MPCore processor enhances the ARM Cortex-A Series of processors by providing the electronics industry with the broadest range of software and feature-set compatible processors. The Cortex-A15 extends the capabilities of the ARM Cortex-A Series by adding efficient hardware support for OS virtualization, soft-error recovery, larger memory addressability and system coherency. While remaining true to ARM's power-efficient design heritage, the Cortex-A15 MPCore processor brings a new level of performance scalability as well as a feature set that enables ARM Partners to address a range of innovative and traditional markets with a single processor architecture.

"The operational and economic benefits of cloud computing will transform the high-tech industry over the next decade. Everything from the handheld devices to the network infrastructure will require more performance and efficiency to handle the increasing amounts of information that will emerge from the use of remote resources," said Jim McGregor, Chief Technology Strategist at In-Stat. "ARM has been at the core of the mobile industry and the Cortex-A15 MPCore and accompanying technologies extends the potential for this highly efficient and flexible architecture to other applications critical to our connected world."

Collaborative differentiation through partnership continues to be the main driver of the ARM business model and the launch of the Cortex-A15 MPCore processor is the result of ARM's work with lead licensee partners Samsung, ST Ericsson and Texas Instruments, who were key drivers of the definition of the processor, ensuring it meets the key challenges faced by the industry.

"We have entered a new era for smart devices where wireless computing solutions bring 3D navigation, augmented reality, HD video filming, high speed broadband and other advanced capabilities to more consumers, enabling our vision of an all-connected world," said Edgar Auslander, Senior Vice President, Strategic Planning at ST-Ericsson. "Following our pioneering single die integration of modem and application engine featuring a dual Cortex-A9 processor, we are pleased to continue to work with ARM as a lead partner for the Cortex-A15 MPCore processor. Integrated into our leading-edge system-on-chip solutions, the new ARM core will enable our customers to build extremely power-efficient devices with an unprecedented level of performance."

"As a long-term key partner, TI has worked with ARM for 17 years to innovate and deliver more than 3 billion ARM processor-based system-on-chip (SoC) devices. As an advanced lead partner and first licensee of the Cortex-A15 MPCore processor, we look forward to leveraging the Cortex-A15 core to deliver industry-leading processors that will provide the high performance demanded by the next generation of connected devices, all within a low power envelope. When pairing the Cortex-A15 MPCore processor with TI's SmartReflex™ 3 technology, future OMAP applications processors will yield a 60 percent reduction in power, enabling TI to continue delivering the industry's most energy-efficient, high performing solutions. We also see the potential for broader market implementations, leveraging the Cortex-A15 core for home entertainment and multimedia applications," said Remi El-Ouazzane, vice president, OMAP platform business unit, TI.

The Cortex-A15 MPCore processor will be supported by specifically optimized ARM Physical IP that was developed jointly with the processor. These optimizations enable rapid development of leadership physical implementations, initially targeting 32nm and 28nm technologies with a roadmap extending to 20nm.

The processor is also supported by a broad range of ARM technology including the AMBA 4 compliant CoreLink™ system IP, CoreSight™ debug and trace IP, Mali Graphics, and a robust set of development tools. This technology is complemented by a broad range of SoC and software design solutions, tools and services from the ARM Connected Community™ ecosystem to provide ARM Partners with a smooth path through the development, verification and production of full function, compelling devices while significantly reducing time-to-market.

For details on the specific new features and capabilities of the Cortex-A15 MPCore processor and the supporting technology go to http://www.arm.com/products/processors/cortex-a/cortex-a15.php

"Microsoft is pleased to be working with ARM to help OEMs deliver immersive user experiences and seamless connectivity by extending Windows and the benefits of the cloud to specialized devices for consumers and enterprises" said Olivier Fontana, director, worldwide partner and field marketing for Windows Embedded at Microsoft Corp. "The ARM Cortex-A15 processor combined with the Windows Embedded Compact 7 operating system provides developers and designers with the latest tools and a streamlined development experience to quickly and easily build rich and compelling specialized devices."

"The ARM ecosystem enables the mobile device experience consumers expect. With optimized Adobe Flash Player 10.1 support for the range of devices enabled by the ARM Cortex-A series, the full web experience scales across the continuum of current and future mobile connected devices. The launch of the Cortex-A15 marks a new era in mobile computing, and we look forward to working with ARM and the ARM ecosystem to ensure optimized mobile Internet experiences," said Danny Winokur, vice president, Flash Client Platform, Adobe

"The Cortex-A15 MPCore processor is the next quantum leap for high-performance embedded applications used in demanding consumer and enterprise devices," said Chi-Ping Hsu, senior vice president, Research and Development with the Cadence Silicon Realization Group. "We are excited to work early on with ARM to ensure that our most sophisticated mutual customers, who are eager to design with the Cortex-A15 MPCore, have access to knowledgeable design expertise at product launch. Through our collaborations, Cadence is able to offer our customers the depth of knowledge and expertise that can help them reap the benefits of this new ARM technology today."

"With the release of the Cortex-A15 processor, ARM has produced another pioneering processor which will enable product manufacturers to deliver exciting devices to the marketplace, with enhanced multiprocessor performance within tight power constraints." said William E Lamie, CEO and President, Express Logic, Inc. "Our ThreadX RTOS, which is already deployed in over 800 million devices, offers designers working with the Cortex-A15 processor a responsive, high-performance, low-memory footprint solution for producing compelling products in today's challenging market."

"The ARM Cortex-A15 processor addition to the family of processors supporting the ARMv7 architecture will enable a range of exciting applications ranging from mobile computing devices, enterprise networking to digital home appliances. Its flexible multiprocessor design fits well with Green Hills' product line of software solutions," said David Kleidermacher, CTO at Green Hills Software. "Green Hills' MULTI IDE with its ARM/Thumb-2 compiler, the INTEGRITY family of RTOSes and secure virtualization technology (which already support the Cortex family of processors) will combine with the ARM Cortex-A15 processor to give OEMs and developers a compelling target for product development."

"The Cortex-A15 processor is another exciting addition to the ARM Cortex family of scalable multicore processors, targeting a wide variety of devices and providing leading combinations of performance and power-efficiency," said Stephan Lauterbach, General Manager, Lauterbach GmbH. "Lauterbach's PowerDebug and PowerTrace range of development tools provide support across the whole family of ARM processors, and we work closely with ARM to ensure that developers have the tools required to bring innovative products to market in a timely and cost-effective manner."

"The Cortex-A15 brings together an array of new features to deliver the performance of a desktop in the power profile of a mobile internet device," said Tom Lantzsch, Executive Officer, Linaro, "we will work with the open source community to ensure that the full extent of Cortex-A15 technology is unleashed for use in Linux based devices."

"OK Labs, working closely with ARM, enthusiastically invests in and consistently benefits from accompanying the evolution of the ARM architecture," noted Steve Subar, CEO Open Kernel Labs. "The ARM Cortex-A15 processor represents an opportunity for ongoing ROI in our ecosystem by providing support for mobile virtualization and helping to make virtualization technology even more accessible and mainstream."

"With its high-performance multicore design, the Cortex-A15 processor will enable OEMs to create compelling products in many market segments where QNX is a key provider of software solutions," said Kroy Zeviar, Alliance Manager, QNX Software Systems. "The QNX® Neutrino® RTOS provides a scalable, embeddable, networked, SMP-capable and memory-protected real-time operating system that already runs across a variety of ARM Cortex processors, and we look forward to adding Cortex-A15 processor support to our product portfolio."

"The ARM Cortex-A15 processor provides an impressive blend of very high performance with ARM's signature low power credentials," said Oliver Gunasekara, Head of North America and Semiconductor Partners, Symbian® Foundation. "Symbian and ARM have worked together for over a decade to enable the mobile industry with over 385 million smartphones. This new processor will open a whole new realm of opportunities for smart mobile devices to replaces legacy x86 PCs."

"Virtualization extensions on the new ARM processor technology significantly elevate the role this new technology will play in defining the next generation of mobile devices" said Glenda Dorchak, vice chairman and CEO at VirtualLogix. "Combining our VLX technology with the Cortex-A15 processor will enable mobile silicon vendors and device manufactures to meet the demand for future handsets with multiple personalities and operating systems significantly increasing functionality, performance and security for both business and consumer users."

"VMware is pleased that ARM is adding virtualization support directly in its hardware solution," said Parag Patel, vice president, Global Strategic Alliances at VMware. "As mobile devices move beyond communications to take on a more computational role, virtualization will be increasingly critical to enable better security and improved manageability of applications and data on these devices. VMware is excited to work with ARM and its partner ecosystem to provide the most advanced and robust virtualization-based solutions for mobile device customers."

In this article: arm, arm cortex, ARM Cortex A15, ArmCortex, ArmCortexA15, breaking news, BreakingNews, Cortex, Cortex A15, Cortex-A15, CortexA15, eagle, MPcore, processor, quad-core, Samsung, soc, st ericsson, StEricsson, Texas Instruments, TexasInstruments, TI, video
All products recommended by Engadget are selected by our editorial team, independent of our parent company. Some of our stories include affiliate links. If you buy something through one of these links, we may earn an affiliate commission.
Share
Tweet
Share