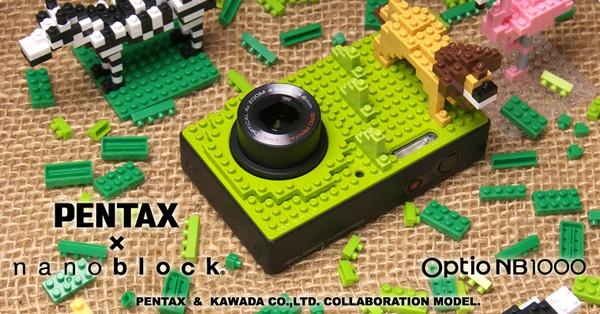 Sure, you can buy compact cameras in dozens of garish and offensive colors, but what if you're the sort who craves a different garish and offensive color every day of the week? You need the $150 Pentax RS1000, a 14.1 megapixel shooter with a 4x optical zoom, 720p video recording, and faceplate that's just four screws away from getting lost. Using the Personal Skin Designer app you can craft your own custom cover (the first one is free), meaning you could be just a few clicks away from having that brick of a camera look like a real brick. Far more exciting, however, is the identically spec'd NB1000 and its Nanoblock connectors, which are a lot like Lego but smaller and presumably cheaper to license. With that you can truly shape whatever you want, like the above safari scene, which makes this model particularly pocket unfriendly. Both cameras are set to release later this year, though the Lego-esque NB1000 is tragically destined only for kids of all ages in Japan.
In this article: 14.1 megapixel, 14.1Megapixel, compact, compact camera, CompactCamera, digital camera, DigitalCamera, nanoblock, nb1000, optio, pentax, pentax otio, PentaxOtio, rs1000
All products recommended by Engadget are selected by our editorial team, independent of our parent company. Some of our stories include affiliate links. If you buy something through one of these links, we may earn an affiliate commission.
Share
Tweet
Share