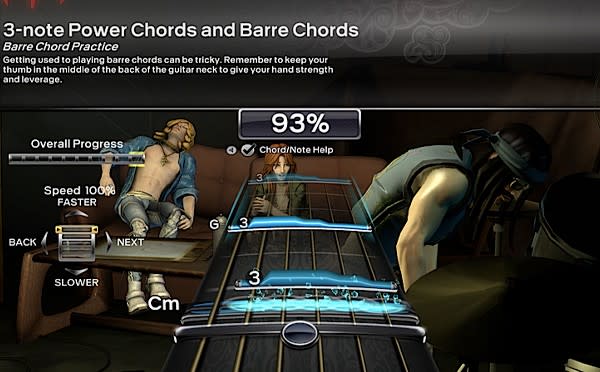 Since our brief glimpses at E3, we've managed to pick up Rock Band 3's new Pro guitars a few times -- both live on the Engadget Show and otherwise -- and have gotten a better feel for how both the Squier Stratocaster (a.k.a. the "real guitar") and Mad Catz's 102-buttoned Fender Mustang replica play. We'll save the in-depth coverage for the final review, but what follows is two separate impressions coming from two different perspectives: one from Ross Miller, a former guitar instructor with 12 years playing experience, and one from Sean Hollister, a Guitar Hero player with no musical background whatsoever. Head on after the break for our full impressions. I've never been a fan of the guitar portion of rhythm games. It never felt worthwhile having to relearn simple arpeggios à la "Ziggy Stardust" as five-button speed runs. My biggest fear when hearing of Rock Band 3's Expert mode was a perpetual skirting of what I like to think of is the uncanny valley of plastic peripherals -- not-quite instruments that overstretch their capabilities. So, to be perfectly blunt, I was shocked how much I loved playing the Stratocaster.

The new on-screen interface shares a lot in common with tablature, so it shouldn't be too hard to adjust -- but it's not without caveats. The on-screen lanes now represent each of the six strings, from low E on the left to high e on the right. Single notes will show up as a number corresponding the fret you need to hold down. Like in past games, a single line stretching behind means sustain the note, but new to here is the slanted tail that implies a slide. Legato (i.e. hammer-ons and pull-offs) is here in abundance (c.f. the incredibly fun "Crazy Train" solo), but bends on the Stratocaster are unfortunately not.

Chords are another story, one that's going to be the hardest adjustment for most players. The chord name will appear to the left of the rail, while the highlighted strings represent what needs to be strummed. We've been told there's some leeway here by one string or so, which should be a relief to the less precise players out there. Now, here's where diehard tab readers are going to have to adjust: instead of displaying all the numbers for a chord, it'll only show one to explain where the index finger is placed. From there you have to surmise how the rest of the chord is played, or look it up via the trainer mode (there's a slight visual cue, but more on that later). It is not indicative of the fret position of the chord.

Let's use a G Major chord to explain. An open G chord is technically third position given its location of the root note, but in Rock Band 3, that particular variant displays a "2" that falls on the A string. The barred G chord in the third position will subsequently be noted with a 3 listed on the low E string, and as you can tell in the picture above, the accompanying bar will elevate on a string-by-string basis to provide a slight visual cue as to how far from the first-finger fret your other digits go. Note that, despite what you may have been playing in your local band, the variant of the chord is fixed and you can't vary it up: an open G chord can't be played with a barred G chord or any other different fingering. As Harmonix's John Drake explained, the developer's got a team of audio experts listening to master tracks and watching live performances to ensure they're giving you the most accurate tablature possible, so if you take issue with their notation, well, you're gonna have quite an uphill battle trying to make your case.

Of the two pro guitars we tried out, we're definitely more fond of the Stratocaster. Even on the prototype model, the action of the strings wasn't too high, the neck was comfortable, and frankly, it just felt more familiar. There's a string mute you can push on to raise and lower. In the up position, nary a sound was produced, but given my habit of strumming closer to the neck, it also didn't register any notes that way -- you can see that happening in the (personally cringe-worthy) first half of the Engadget Show demo. Instead of adjusting my play style, my preference is just to play with the mute off and the TV volume up a bit louder. As for Mustang, the 102 button layout just doesn't work. The most fundamental issue is that every button is the same size; there's no tactile cue for your finger position based on the thickness of the buttons, like you would on a real guitar based on the thickness of the string. We heard through the grapevine there was at some point a prototype with buttons of various width, but for whatever reason that didn't make the cut.


Both times I've tried "Crazy Train" on pro expert guitar, I've had such a visceral feel for what I was playing, It challenged me to play more precisely than I could ever on my own, and the sense of accomplishment was equivalently fulfilling. The extent to which this mode demands performance perfection won't appeal to everyone, but for me, it's exactly what I'd want out of a game like this. As for those who're picking this up to learn guitar, the ramping difficulty levels in Pro mode are very smartly executed. If you're willing to make a commitment to purchasing a first instrument and feel like you could use the encouragement, our gut impression is this is gonna make a powerful learning tool. Of course, like any learning tool, what you do with it ultimately up to you.

I may know a Guitar Hero axe like the back of my hand, but when it comes to real guitar I can't play a lick, much less a tune. So when Mad Catz handed me the six-string, 102-button Fender Mustang Pro, well... part of me wanted to run and hide. Thankfully for all concerned, I kept my dignity and gave "I Love Rock And Roll" the old college try, but I have to say that while it felt like a fairly well-thought-out peripheral, the Mustang's not quite my ride.

Where video game controllers typically put your fingers on or next to all the triggers, you've got to gauge your distance on the Pro's 17 numbered frets sight unseen (or look down frequently) and it's not easy holding just a few of those 102 tiny silver fret keys at a time even with Rock Band 3 providing rough visual cues on-screen. The nylon-coated stainless steel strings are a different story, tough, well-spaced and presumably easy to tell apart for a pro, but's there's no getting around the fact that your guitar heroics won't carry over -- if you don't precisely and delicately strum a single string when it's a single string you want, it's easy to accidentally hit more than one or actuate the same one twice. Both frets and strings were nuisances in classic Rock Band mode, where I constantly hit more notes than I'd intended, but I suppose the extra speed could come in handy if you're shredding on Expert.

Speaking of expert, though, it's a well-known fact that some gamers will overcome any obstacle if it means an achievement or a high score, and there's a particularly massive payoff -- real musical chops -- should you master the Mustang in Pro mode. Even as I struggled with the dizzying array of buttons I couldn't help but feel that I was learning something valuable, a transferable skill if you will. Such is Rock Band 3's siren call. Just know that buying it for your kids or significant other won't magically teach them to play, any more than a new computer will inspire them to program.