Motorola and Verizon team up for Z-Wave monitoring service, let you control your home as you roam

Verizon to demo Home Monitoring and Control system at CES, launch pilot in Jersey next month 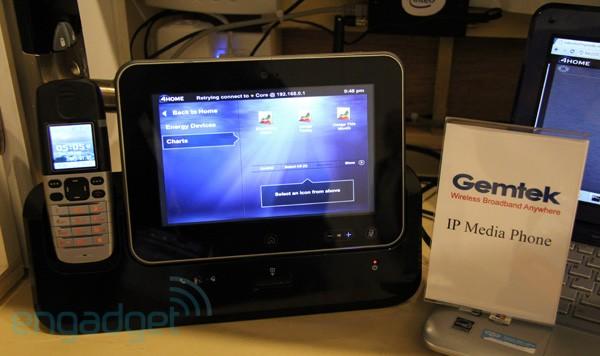 OpenPeak brought us one of the first Atom-based tabletphones at IDF 2008, but it may have passed on the torch in more ways than one -- this year, it's Gemtek's turn to show off a Moorestown machine with Linux on board that shares a host of design cues. Who-copied-whoms aside, we have to say the "IP Media Phone" is a mildly intriguing device, combining a DECT cordless handset with a 7-inch MeeGo tablet, the latter ready for both VoIP and video chat thanks to an integrated webcam and mic, and has full home automation controls thanks to 4Home software and a built-in Z-Wave radio. 802.11 b/g/n WiFi connects it to the base station / charging dock, which has room for two USB ports, an ethernet jack, and an SD card slot, while the tablet itself features mini-HDMI, mini-USB and a headset adapter plus an SD card of its own. Though the glossy fingerprint magnet of a capacitive touchscreen left much to be desired, laggy to respond to our press, we were told the tabletphone's an early prototype with wholly unfinished hardware. If history's any indication, expect to see the final form thoroughly rebranded when it likely arrives in the first half of next year.

10
In this article: 4home, cordless, cordless phone, CordlessPhone, DECT, Gemtek, hands-on, home automation, HomeAutomation, IDF, IDF 2010, Idf2010, Intel, MeeGo, meego tablet, MeegoTablet, Moorestown, phone, tablet, tablet pc, TabletPc, VoIP, Z-Wave
All products recommended by Engadget are selected by our editorial team, independent of our parent company. Some of our stories include affiliate links. If you buy something through one of these links, we may earn an affiliate commission.
Share
Tweet
Share