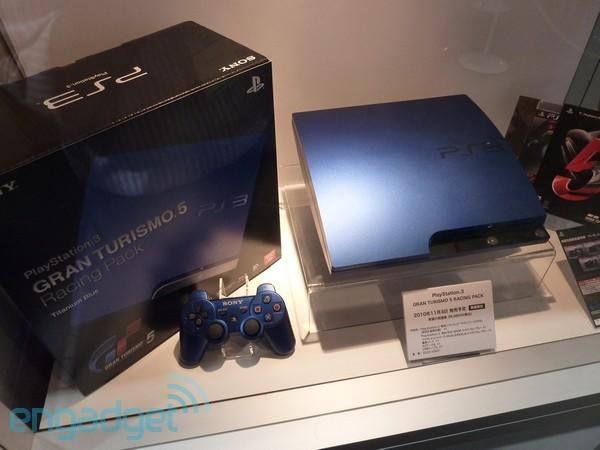 We knew it was coming, and now here it is: Sony's special edition PS3. To commemorate the impending release of GT5 the console is turning blue, and while the rather vibrant version we saw in the official press photos from August didn't do much for us, seeing the thing in the flesh (admittedly behind glass) gave us quite a different impression. It has the same matte finish as the current PS3 slim, but the rich blue gives it almost a metallic effect. It's really quite a looker, and while we wouldn't normally splurge for such "special" editions, how often does a new Gran Turismo come around? Once a decade at most. This Gran Turismo 5 Racing Pack hits Japan on November 3 for 35,980 yen. That's about $420 of those dollars you've been saving for oh so long. 8
In this article: console, feature, featured, features, gran turismo, gran turismo 5, GranTurismo, GranTurismo5, playstation 3, Playstation3, ps3, sony, special edition, SpecialEdition, tgs, tgs 2010, Tgs2010
All products recommended by Engadget are selected by our editorial team, independent of our parent company. Some of our stories include affiliate links. If you buy something through one of these links, we may earn an affiliate commission.
Share
Tweet
Share