NFL FanVision review -- and behind the scenes 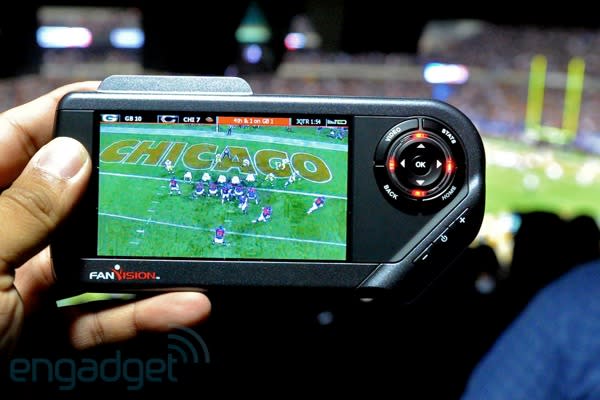 We've been wanting to try out Kangaroo TV's FanVision in-stadium video handheld ever since we first heard it was coming to 10 NFL teams (and the Michigan Wolverines) this year, and we finally got our chance last night during the Packers / Bears game here in Chicago. The system is actually super interesting, as it's the only large-scale DVB-T operation we've seen in the States; FanVision sets up a private network for each team and sports event they work with. At Soldier Field, that means there are two transmitters at either end of the field for people in the stadium, and another located in the scoreboard so the devices work while people are tailgating in the parking lot. The system has about 8Mbps of bandwidth, so each of the 10 channels on the device streams at about 800Kbps, a quality level the produces some blockiness but is perfectly watchable on the FanVision handheld's 4.3-inch QVGA screen.

Gallery: NFL FanVision review and behind the scenes | 13 Photos


What's on the 10 FanVision channels varies depending on the team, stadium, and broadcast setup of each game; Monday Night Football games have a SkyCam channel, for instance, while games at Dolphins Stadium have a dedicated cheerleader channel. There are also three other game broadcasts and the NFL RedZone channel, so you can keep track of everything else going on in the league. The device buffers three of the camera channels locally for replays -- an operator in the control room tags the beginning and end of each play and specifies which camera has the best angle on the play. It's a slick trick that lets you dial up a replay instantly, since it's stored right there on the device. We just wish you could store more than the last play -- once the next play starts the old replay is gone forever.


That's not the end of the world, though -- another operator spends the entire game building a continuously-looping highlight channel, so you can catch up on what's going on at any point in the game. You can also watch the scoreboard feed, as well as the network broadcast of the game itself -- and since FanVision is retransmitting the feed directly from the broadcast truck, it's actually a few seconds ahead of watching it on TV. (For Monday Night Football FanVision was around six or seven seconds ahead of the TVs in the stadium, since ESPN delays the broadcast so they can bleep out any inadvertent profanity the mics pick up.)

Of course, you don't go to the stadium to watch ESPN in real time, you go to watch the game -- and we're happy to report FanVision makes watching the live game much more interesting as well. For starters, you're not stuck waiting for the scoreboard operator when it comes to replays -- anyone with a FanVision last night knew right away that the Packers wasted a challenge on that backbreaker James Jones fumble. (Maybe they should give these to coaches!) You're also not stuck waiting for stats, since both team and individual numbers are all right there -- including some deeper info like offensive success running and passing to different parts of the field. (Fun fact: all the stats in the NFL are delivered by a central server called NFL GSIS, pronounced "Jesus.") It's also kind of cool that the device buzzes and lights up red when either team is in the red zone -- you should probably have noticed that anyway, but, well, red LEDs. You know how it is.

We've also found that cell service in a stadium is usually atrocious, so being able to check on other scores, other games, and even load up fantasy stats on the FanVision is incredibly useful -- although you can't load up a fantasy defense, for some reason. (FanVision says they're working on it, but there's no timeline.) All of these features work flawlessly in practice -- the handheld is smooth and responsive, and tuning between channels and calling up data is as fast as we've ever seen on a mobile video device. Battery life is pegged at six hours, more than enough for an NFL game; at golf events FanVision rents the units with a spare battery and people use 'em all day.

Speaking of rentals, that's actually the biggest problem with the FanVision in the NFL -- you can only buy the units for $199 right now. If you have season tickets or you're otherwise regularly attending games it's a no-brainer; you'll definitely get your money's worth out of a FanVision. If you're only going to a game here or there, though, it's kind of a lot of money, especially since it doesn't do a damn thing outside of the stadium. FanVision says it's working on rentals for the NFL, but nothing's happening yet -- right now the only way to get a FanVision at a football game is to either be lucky enough to score a free promotional unit or pony up the two Bennys.
We'll be honest: we weren't expecting FanVision to be nearly as good as it is -- single-purpose embedded gadgets are usually a laggy mess of tortured UI design and poor performance. Not so with the FanVision, which is the second revision to a third generation product that's been used for the PGA and NASCAR in the past -- it's quick, it's intuitive, and it's actually fun to use. Once FanVision works out a rental model, these little screens will be totally ubiquitous at NFL games -- who wouldn't pay an extra $20 or $30 for this much of an improvement to the live experience? The other hurdle is getting all the teams to sign on, and that's slow going -- Jets fans will be able to use FanVision during games at the New Meadowlands, while the Giants haven't gotten on board. But all of that's just a matter of time -- as is the Packers' eventual murderous revenge against the Bears.
In this article: dvb t, dvb-t, DvbT, fanvision, Kangaroo TV, KangarooTv, mobile tv, MobileTv, nfl, nfl fanvision, NflFanvision, portable tv, portable video, PortableTv, PortableVideo, review, video
All products recommended by Engadget are selected by our editorial team, independent of our parent company. Some of our stories include affiliate links. If you buy something through one of these links, we may earn an affiliate commission.
Share
Tweet
Share