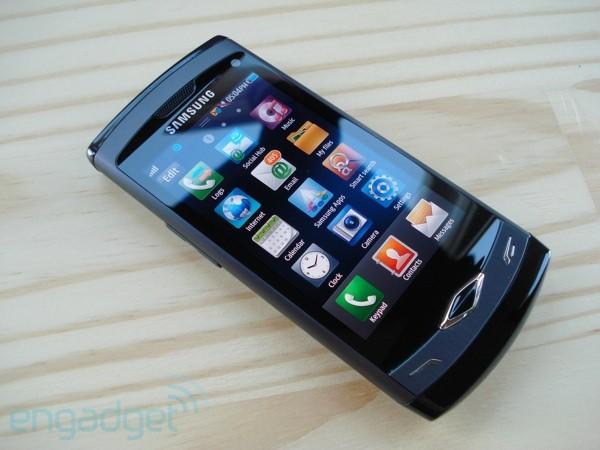 For some of us jaded and cynical gadget bloggers, getting a feature phone to review is somewhat painful. We grumble and roll our eyes, then put the box in a corner of the office for "later." See, feature phones are really just wannabe smartphones -- like a walled garden full of weeds and broken glass, most feature phones are crippled with restrictions and a crappy user experience. But somehow this time, when we finally opened the box, we discovered something different: a smartphone disguised as a feature phone. The Samsung Wave S8500 was announced with great fanfare at Mobile World Congress in February, and was (at the time) the first device to showcase the Bada mobile platform, the first to feature a Super AMOLED display, and the first to offer Bluetooth 3.0.

Let's dive in and take a look at what the Wave is all about -- and what it's not. The instant you see and touch the Wave, you know you're dealing with a premium device. It feels solid and dense in the hand (size and weight match the iPhone 4), and both materials and fit and finish are top-notch. The front is made of glass with subtly concave top and bottom edges, covering a 3.3-inch 800 x 480 pixel Super AMOLED capacitive touchscreen which looks absolutely gorgeous and remains visible in direct sunlight. The sides and back (including the battery door) are made of gray anodized aluminum with 2 diamond shaped cutouts for the 5 megapixel autofocus camera and LED flash. The top and bottom are capped in glossy black plastic, with a matte black surface surrounding the micro-USB connector (behind a sliding door), 3.5mm headphone jack and a surprisingly loud speaker at the top. There's a volume / zoom rocker on the left edge, and a lock key and a 2-stage camera button on the right edge of the phone. At the bottom of the display, there's a jewel-like diamond shaped home key, flanked by a call / log button on the left and a hangup / back / power button on the right. All the controls provide pleasant tactile feedback. Overall, there's a certain formality and elegance to the design that's quite appealing, yet we're hesitant to call the Wave anything more than attractive.

For a feature phone, the Wave boasts a remarkable list of specs, seemingly lifted right off a high-end smartphone: 1GHz Cortex-A8 CPU, PowerVR SGX 540 GPU, 512MB of RAM, WiFi b / g / n, Bluetooth 3.0, GPS / A-GPS, FM radio, video output, compass and accelerometer. Unfortunately, there's no provision for 3G in North America: the GSM radio, which is unlocked, supports quad-band EDGE but only dual band HSPA (900 / 2100 MHz). Behind the battery door, you'll find the usual SIM and microSD slots (not hot-swappable), plus a generous 1500mAh battery. We managed to clock an impressive 3 days of moderate use (including camera, music playback and web browsing) with WiFi enabled and Bluetooth disabled, all while polling three Gmail accounts. There's only about 390MB of on-board storage available, and our review unit arrived without a microSD card, so we supplied our own.

Samsung is no stranger to putting nice cameras in its high-end devices, and the Wave is no exception. It features a 5 megapixel autofocus camera with macro, single LED flash, and support for 720p video recording. While these specs are relatively pedestrian nowadays, the resulting pictures and videos are well above average. Shots contain sufficient detail and exhibit accurate color balance and exposure. Low-light performance is surprisingly good, and noise is kept under control. Video recording is silky smooth (30fps sustained), with few compression artifacts and great audio. There's both touch-to-focus and a dedicated 2-stage camera button, but the autofocus is not available when recording video. The interface is easy to use and similar to what Samsung offers on its point-and-shoot cameras. There's a plethora of settings, including panorama and smile detection modes, as well as manual controls such as ISO and white balance. The icing on the cake is a full suite of tools to edit, tag and upload your pictures and videos to popular sites like Flickr and YouTube. The combination of a decent sensor and optics, dedicated controls, an intuitive interface, and a variety of settings make the Wave an excellent phone for taking pictures or recording video.

The first thing we noticed about Bada is that it's pleasantly fast, no doubt thanks to the sensitive capacitive touchscreen, speedy processor and heaps of RAM. It also never crashed on us, only popping an occasional cryptic error message. The second thing we noticed about Bada is that it's extremely familiar, mostly because the TouchWiz 3.0 interface is almost identical on the Wave and the Galaxy S, despite the different underlying OSs. If you've ever used another phone with TouchWiz or even an Android device, you'll feel right at home. There are multiple home screens with widgets (but no shortcuts), an editable app tray which scrolls sideways, and a notification bar. Multitasking is included: holding the home key brings up a task manager (a la Symbian). Most Bada apps support long presses and feature a menu softkey similar to the menu hardkey in Android. Speaking of which, the Wave ships with a veritable cornucopia of bundled apps, most of them decent. There's also full Java support, plus the Samsung Apps app store, which strangely contained zero apps -- possibly because it's not technically launched in the US.

The WebKit-based Dolphin web browser is one of the best we've used on a feature phone; it was able to render the Engadget site without drama (something some smartphones still struggle with). Scrolling is snappy and pinch-to-zoom works as advertised. There's no Flash support, however. Update: There's support for Flash 9, but it's disabled by default. The email client handles Gmail (and other providers) via POP3, IMAP4, and Exchange ActiveSync (including contacts and calendar). Gmail setup requires some tweaks since POP3 is selected by default, and there's no way to mark multiple messages as read, but otherwise it works as expected (still, you're probably better served by Gmail's web and Java versions). There are also dedicated Twitter and FaceBook clients -- the interface won't win any awards, and sadly there's no way to upload pictures with the Twitter client, but the apps are usable. An IM client is included but it requires creating an account with yet another third party for configuration, something we're not too excited about. The "Route 66" maps app left us cold. There's nothing particularly wrong with it, but after years of navigating the world with Google and Ovi Maps, we're spoiled -- so we installed the Java version of Google Maps and called it a day.

Media is where the Wave shines, especially video playback. The music player sounds excellent and features a CoverFlow-like interface in landscape mode, but there's no gapless playback (the music pauses between tracks). The video player supports a staggering array of formats (including DIvX, XviD and MKV), and handles 720p flawlessly. The photo viewer is easy to navigate, with pinch-to-zoom and the aforementioned full suite of tools to edit, tag and upload your content. The Wave also provides some handy additional features, such as a WiFi hotspot (super rare for a feature phone) and Bluetooth / USB tethering, which we fully expect carriers to nix on subsidized models.

The Wave is a lot like a baby Galaxy S. What you lose in screen size and performance, you gain with better materials, build quality, battery life, and camera features (namely an LED flash and a dedicated 2-stage camera button). Bada, surprisingly, behaves a lot like a baby Android. It arguably provides the best feature phone experience currently available, but still leaves us craving for more. In North America, where we have 4 subsidized variants of the the Galaxy S to chose from, the Wave makes little sense (especially without the required 3G bands). But for the rest of the world, we're pretty sure the Wave is one of the best wannabe smartphones available.
In this article: bada, mobile, review, s8500, samsung, wave
All products recommended by Engadget are selected by our editorial team, independent of our parent company. Some of our stories include affiliate links. If you buy something through one of these links, we may earn an affiliate commission.
Share
Tweet
Share