D. Melanson
@donmelanson
October 1st, 2010
In this article: capacitive touch panel, CapacitiveTouchPanel, fuze, fuze+, media player, MediaPlayer, mp3, mp3 player, Mp3Player, pmp, portable media player, PortableMediaPlayer, review, sandisk, sansa, sansa fuze, sansa fuze+, SansaFuze, SansaFuze+, slotmusic, slotradio, touch panel, TouchPanel
SanDisk's original Sansa Fuze may have had a solid run -- it's been a particular favorite among those looking for a good, inexpensive player that doesn't skimp on features or audio quality -- but there's no question that it was long overdue for an update, and SanDisk recently came through on that front with the completely revised Sansa Fuze+. Boasting a considerably sleeker design, the Fuze+ replaces the Fuze's venerable tactile click wheel with a capacitive touch panel (but not a touchscreen), and it hangs onto many of the features that made the original Fuze stand out, including a microSD card slot, FM radio, and support for a wide range of formats (including FLAC and AAC). Are all the changes for the better? Read on for our full review. %Gallery-103839%
SanDisk 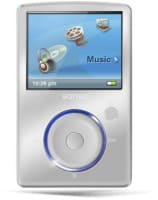 While unquestionably an improvement over the original Sansa Fuze in the design department, the Fuze+ still feels like it's a few steps behind much of the competition. Although not unreasonably large by any means, it is a bit bulky for such a basic player, and the all-plastic body doesn't exactly inspire much confidence in its durability the first time you pick it up -- it does seem sturdy enough to hold up to reasonable wear and tear, though. As we mentioned, the biggest change is the inclusion of a capacitive touch panel instead of a tactile click wheel, which leaves the power button and volume rocker switch as the only physical buttons on the player. While that may seem like an improvement to some, it's also at the root of our biggest problem with the player: the interface.

The touch panel itself works as you'd expect, letting you either swipe in any direction or simply tap to navigate the menu system. The problem is that the Fuze+'s interface tends to either be too responsive when it don't want it to be (causing you to accidentally skip ahead or back), or not responsive enough, with the interface generally being just laggy enough to get on your nerves. The player itself also takes a surprisingly long 15 seconds or so to first boot up, but is otherwise pretty responsive when simply waking from sleep mode. If you can get past those issues, though -- a big "if" -- the UI itself isn't half bad, with the main menu navigated with horizontal swipes or taps, and content within each accessible by scrolling up and down -- a tap in the center of the panel takes you deeper into each section. You'll even get a few customization options, and it all looks nice enough on the Fuze+'s 2.4-inch QVGA screen.

So, that's one pretty big drawback, but the Fuze+ does have a fair bit going for it -- the biggest advantage being the sheer range of functionality you get for the money. That includes decent video playback (albeit on a 2.4-inch screen), an FM radio (with the ability to record), a microSD card slot for expansion, and an impressive range of supported formats (including FLAC, AAC, and OGG, to name a few). One minor note about AACs, however; while the Fuze+ will carry over album artwork for songs purchased in iTunes, it won't carry over downloaded artwork for CDs you've ripped with iTunes. The player also, of course, supports SanDisk's slotRadio microSD cards, but we won't hold that against it -- all joking aside, it's not the worst way to get a ton of music for cheap (various cards with a 1,000 songs are available for $40 each).

Living up to the reputation of the original Fuze and other SanDisk players on places like the Head-Fi forums, the Fuze+ also delivers solid quality. While the included earphones certainly won't satisfy the audiophiles out there, the player itself does seem to pump out sound at least as good if not a tad better than an iPod touch -- we tested it with a number of different headphones ranging from stock iPod buds to some Grado SR-80s, as well as some speakers.

We should also mention that SanDisk doesn't provide any desktop management software whatsoever -- you're only option out of the box is to drag and drop files to the appropriate folders. That may be fine for some, but we're guessing most will likely want to look into some of the compatible software options available (Windows Media Player 10 will work for PC users).

Given the features offered for the price (starting at just $80 for the 4GB model), we really wanted to like the Sansa Fuze+. Unfortunately, the interface is something of a deal-breaker for us -- there's just too many other more elegant and usable options out there (iPod or otherwise) for us to see us using it on a day-to-day basis. If you're able to try it out yourself first and think you can live with its shortcomings, however, you won't likely be disappointed with the rest of the player, and we're certainly still curious to see if SanDisk or someone else is able to improve on the capacitive touch panel idea in a future player.
All products recommended by Engadget are selected by our editorial team, independent of our parent company. Some of our stories include affiliate links. If you buy something through one of these links, we may earn an affiliate commission.