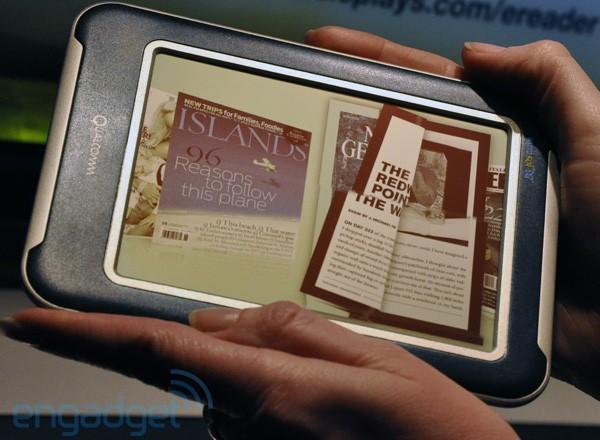 When we reported that the Mirasol low-power color displays were pushed back to early 2011, that wasn't technically correct -- Qualcomm just informed us that the company's cranking out panels even as we speak, and will ship them to OEMs this fall. So what's actually going to happen in Q1 2011? The formal release of Mirasol devices, of course. Representatives told us that the 5.7-inch, 220ppi XGA color display will appear in multiple products with multiple partners next year, and that they "will be in devices that are converged and look a lot more like a tablet PC than an e-reader." Following that, they said, the company will turn its attention to developing Mirasol for smartphones. We couldn't get Qualcomm to comment on a rumored $2b Mirasol plant, unfortunately, and there's no word on that color Kindle, but we imagine all will be revealed at or shortly after CES next year.
In this article: color display, ColorDisplay, Display, Display technology, displays, DisplayTechnology, e book, e books, e reader, e readers, e-book, e-books, e-reader, e-readers, manufacturing, Mirasol, mirasol display, MirasolDisplay, Qualcomm, qualcomm mirasol, QualcommMirasol
All products recommended by Engadget are selected by our editorial team, independent of our parent company. Some of our stories include affiliate links. If you buy something through one of these links, we may earn an affiliate commission.
Share
Tweet
Share