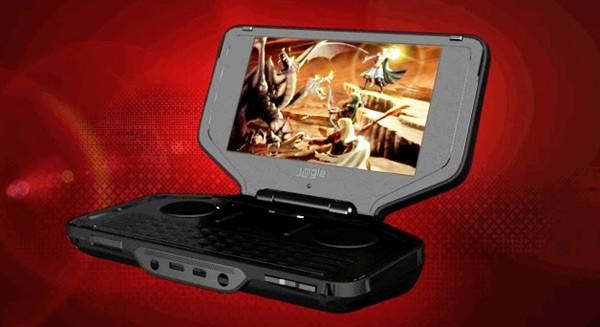 Apparently Panasonic has been working itself into a frenzy over a new handheld video game console designed solely around the concept of taking MMORPGs with you everywhere you go -- like you weren't already wasting too much of your life. The makers of the ill-fated 3DO are returning to the gaming world with a portable system dubbed "The Jungle." The clamshell device will allegedly sport a super high-resolution display, features a full QWERTY keyboard along with what looks like a touch sensitive d-pad and button arrangement, and may run atop a custom Linux build. The Jungle will also apparently sport a mini HDMI port, a micro USB port, and a 3.5mm headphone jack. To our eyes, the system looks a little on the clunky side, with a definite air of something out of Nokia's N-Gage line -- not a good thing for a 2010 device. Alongside the system itself, Panasonic will launch a Battlestar Galactica title for the device, and a web show called Online Underground.

We're digging up more details right now, but the company (actually an offshoot of Panasonic called Panasonic Cloud Entertainment) has already set up shop with a site and a few teaser videos. Check out the mysterious new handheld in another pic and some videos after the break (including a look at the Battlestar Galactica title), and stay tuned as we unearth the full story on the Jungle.

Update: Well that didn't take long. We'd heard rumblings that the console would make its way to an MTV show, and sure enough, the Jungle has shown up on Rob Dyrdek's Fantasy Factory. Rob apparently is making a "jingle" for the unreleased device, which looks rather huge in the hands of the skateboarder. Obviously Panasonic is desperately trying to create some viral hype around the device (leaks to a few blogs and this MTV appearance), but we're pretty unimpressed thus far. Maybe the jingle will convince us. If you've got video -- send it our way!

In this article: breaking news, BreakingNews, handheld gaming, HandheldGaming, jungle, panasonic, Panasonic Cloud Entertainment, PanasonicCloudEntertainment, portable gaming, PortableGaming, the jungle, TheJungle, video
All products recommended by Engadget are selected by our editorial team, independent of our parent company. Some of our stories include affiliate links. If you buy something through one of these links, we may earn an affiliate commission.
Share
Tweet
Share