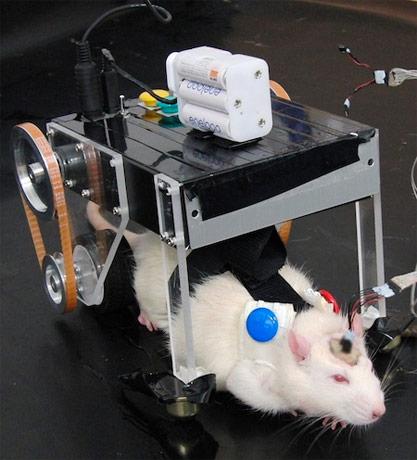 So, let's paint the picture, shall we? There's a rat, a bundle of electrodes, more wiring than an electrician would know what to do with and some sort of wheeled apparatus. In the background stands a team of crazed Japanese scientists, intent on never sleeping again until said rat controls said vehicle entirely with his mind. Nah, it's not a re-run of a WB classic -- it's real life, and it's happening now in a dark, shadowy corner at the University of Tokyo. The RatCar is a newly developed rat-vehicle experiment that researchers hope will open new doors for those with mobility issues; we've seen brain-machine interfaces change the lives of the disabled before, but giving them the ability to control their wheelchair with their mind (for instance) would be taking things to an entirely new level. As of now, the team still has to figure out how to accurately determine how much movement is coming from the rat's feet and how much is coming from its mind, but there's no question that the research shows promise -- just don't let the humanoids learn of our findings, okay folks?
In this article: BMI, brain, brain-machine interface, Brain-machineInterface, disability, disabled, EEG, electrodes, health, mental, rat, research, tokyo, university, University of Tokyo, UniversityOfTokyo
All products recommended by Engadget are selected by our editorial team, independent of our parent company. Some of our stories include affiliate links. If you buy something through one of these links, we may earn an affiliate commission.
Share
Tweet
Share