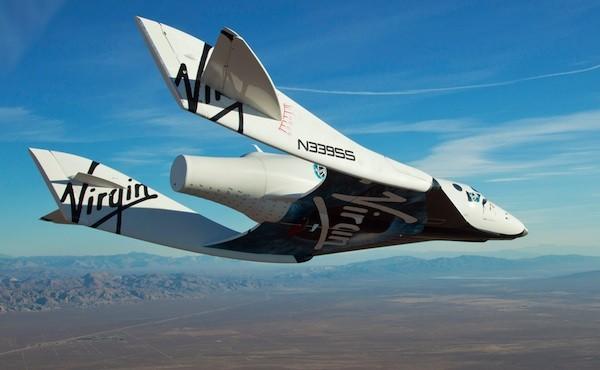 It completed its first flight with a crew on board back in July, and Virgin Galactic's VSS Enterprise (a.k.a. SpaceShipTwo) has now crossed what's unquestionably its biggest hurdle to date: the first solo glide flight. That happened early Sunday morning at the Mojave Air and Spaceport in California, where the VSS Enterprise took off attached to the mothership and then separated at an altitude of 45,000 feet, after which it was freely piloted by Pete Siebold and co-pilot Mike Alsbury for a full eleven minutes before safely landing on the runway (another first for the spaceship). Oh yeah, there's a video -- head on past the break to check it out (along with the official press release).

VSS Enterprise achieves manned free flight from over 45,000 ft (13,700 metres) and successfully glides to land at Mojave Air and Spaceport.

10th October 2010, Mojave, CA. Virgin Galactic, the US company developing the world's first commercial manned space flight system and tourism business, is delighted to announce the successful completion today of the first piloted free flight of SpaceShipTwo, named the VSS Enterprise. The spaceship was released from its mothership at an altitude of 45,000 ft
(13,700 metres).

During its first flight the spaceship was piloted by Pete Siebold, assisted by Mike Alsbury as co-pilot. The two main goals of the flight were to carry out a clean release of the spaceship from its mothership and for the pilots to free fly and glide back and land at Mojave Air and Space Port in California.

Other detailed objectives of the flight were successfully completed, including; verification that all systems worked prior and following the clean release of Enterprise; initial evaluation of handling and stall characteristics; qualitative evaluation of stability and control of SS2 against predictions from design and simulation work; verification of performance by evaluating the lift-to-drag ratio of the spaceship during glide flight; practice a landing approach at altitude and finally descend and land.

Preparations for the milestone flight were extensive. The WhiteKnightTwo mothership (Eve) flew 40 times including 4 captive carry flights of spaceship and mothership mated together. The most recent captive carry was on Sept 30th. The most recent solo flight was on October 5th and demonstrated that all the systems required for a free flight by the VSS Enterprise were functioning correctly without any safety issues. Commenting on the successful flight Scaled Composites pilot, Pete Siebold, said "The VSS Enterprise was a real joy to fly, especially when one considers the fact that the vehicle has been designed not only to be a Mach 3.5 spaceship capable of going into space but also one of the worlds highest altitude gliders."

Sir Richard Branson, founder of Virgin Group, who was present during the first successful flight, added "This was one of the most exciting days in the whole history of Virgin. For the first time since we seriously began the project in 2004, I watched the world's first manned commercial spaceship landing on the runway at Mojave Air and Space Port and it was a great moment. Now, the sky is no longer the limit and we will begin the process of pushing beyond to the final frontier of space itself over the next year."

Virgin Galactic is now well on the way to becoming the world's first commercial space line with 370 customer deposits totalling $50 million. Future commercial operations will be at Spaceport America in New Mexico where final preparations are taking place for a finished runway inauguration ceremony on Friday 22nd October 2010. National Geographic channel in the United States will be showing a documentary on the build up and preparation for the first flight of VSS Enterprise on Monday, 18 October at 10.00pm ET/PT.

George Whitesides, CEO of Virgin Galactic who was also present at the historic flight, added "To see the world's first manned commercial spaceship landing on a runway is a sight I always dreamed I would behold. Now, our challenge going forward will be to complete our experimental program, obtain our FAA licence and safely bring the system into service at Spaceport America, New Mexico."
In this article: glide flight, GlideFlight, solo glide flight, SoloGlideFlight, space, spaceshiptwo, test flight, TestFlight, video, virgin, virgin galactic, VirginGalactic, vss enterprise, VssEnterprise
All products recommended by Engadget are selected by our editorial team, independent of our parent company. Some of our stories include affiliate links. If you buy something through one of these links, we may earn an affiliate commission.
Share
Tweet
Share