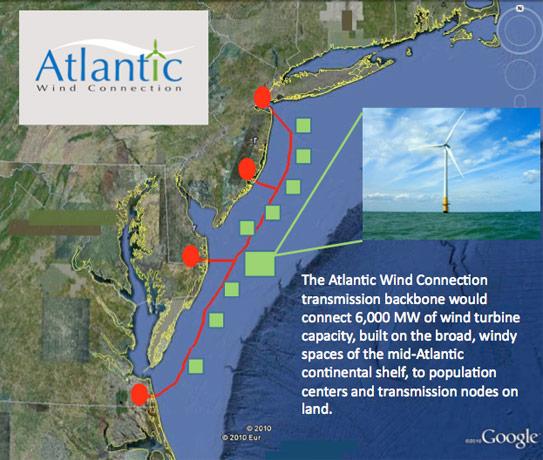 It's been said before, but seriously -- is there anything that Google won't invest in? The company that's also looking into ISPs, voice search and Pac-Manning its home page is now sinking a few billion (give or take) into an ambitious new offshore wind project. The move comes just months after inking a score-long deal to power data centers with wind energy, and Google's involvement is helping the Atlantic Wind Connection backbone move forward. In theory, this backbone will stretch 350 miles off the coast from New Jersey to Virginia and will be able to connect 6,000MW of offshore wind turbines, and the AP reports that the initial phase of the project will be capable of "delivering 2,000 megawatts of wind energy, or enough to power about 500,000 homes." Good Energies, Marubeni and Trans-Elect are also getting in on the action, with the aforesaid first phase to be completed by early 2016. Also, it's expected that the energy created from this endeavor will cost "several times more than conventional electricity," but obviously the Big G views this as a solid long-term investment.
In this article: Atlantic Wind Connection, AtlanticWindConnection, AWC, business, eco-friendly, energy, Good Energies, GoodEnergies, google, google energy, GoogleEnergy, green, industry, investment, Marubeni, offshore power, OffshorePower, wind, wind energy, wind power, WindEnergy, WindPower
All products recommended by Engadget are selected by our editorial team, independent of our parent company. Some of our stories include affiliate links. If you buy something through one of these links, we may earn an affiliate commission.
Share
Tweet
Share