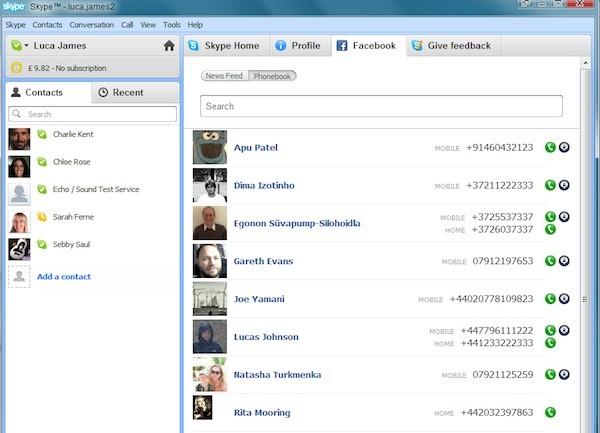 Nope, it's not a Facebook "phone," but it's probably the closest you're gonna get to one right now. Skype has just unleashed the no-longer-in-beta version of its 5.0 Windows software, and not only has it drastically tided up the interface, but just like the rumor said, it's taken advantage of Facebook Connect in a big way. The new version, which will apparently be available for public download within minutes of this post hitting the internet, still has a familiar look and feel, but the most noticeable changes are the addition of photos to the contacts list and the new Facebook tab. Logging into your Facebook account within the program populates your regular News Feed, but also attaches Skype call / SMS buttons next to friends that have either their Skype handles or mobile phone numbers listed on Facebook. Hit one of the buttons and you're, well, connected! There's also an option to view your Facebook Phonebook, which basically lists all your contacts' mobile phone numbers -- though, oddly, it doesn't list Skype handles within that area. Of course, the final version still allows for 10-way video calls and includes the automatic call recovery feature, which brilliantly reconnects dropped calls as if the drop didn't really happen. If and when these features will hit Skype's mobile version, your guess is as good as ours -- a company spokesperson told us there's nothing to talk about on that end right now. Of course, we could go on and on about the new software, or you could hit the source link, download it yourself, and let us know what you think about it below.

Update: Skype says the source link should work -- even though it says it's Skype 4.2, the software is 5.0. 
THE NEW SKYPE BRINGS PEOPLE TOGETHER LIKE NEVER BEFORE

14 OCTOBER 2010 – LUXEMBOURG – Skype today announces the launch of the new Skype for Windows, which brings people together like never before.

• The integration of the Facebook News Feed and Phonebook in Skype makes it easier to stay connected with the people and communities you care about.
• A revitalised look and feel makes voice and video calling, instant messaging, screen sharing, file sharing and more, intuitive and easy to navigate.
•Skype users can bring even more of their family and friends together with the new group video calling feature available in open beta.

The Facebook integration makes Skype even more social. For the first time Skype users can keep up-to-date and interact with their Facebook News Feed, including posting status updates, commenting, and liking, directly from Skype. Even better, the Facebook Phonebook in Skype allows users to call and SMS their Facebook friends directly on their mobile phones and landlines with just a few clicks. If your Facebook friend is also a Skype contact, you can make a free Skype-to-Skype call.

Video calling accounted for approximately 40% of all Skype-to-Skype minutes in the first half of 2010. People who download the new Skype will receive a free trial of group video calling in beta for a chance to try out video calling with more than two people. The dynamic view makes it easy to follow along on group video calls by automatically moving the focus to the person speaking on the call. With the eagerly anticipated introduction of group video calling, family, friends and work colleagues can do more things together whenever they are apart.

Skype users have spent an average of 520 million minutes every day talking to people on Skype, whether doing a Skype-to-Skype call for free or calling any phone for very little cost. With the new Skype, we've simplified the user interface to provide a clean and more powerful communications experience. When you initiate a voice or video call with someone, users are provided an immersive call experience that reduces distraction. It's also faster to find existing contacts with pictures and avatars displayed next to contact names along with mood messages, and easier to find new contacts with real-time search.

With a focus on increased call quality, the new Skype introduces automatic call recovery, which helps users quickly reconnect calls that are interrupted due to Internet connection problems. Plus, a call quality manager gauges audio and video quality during calls, providing guidance on resolving problems and improving the call experience.

The new Skype Home serves as the dashboard for your Skype experience, providing a feed of mood messages from your contacts. It also helps you get the most out of Skype with tutorials on everything from how to make a video call to how to sign up for a subscription.

About Skype
Skype is a software-based communications platform that offers high-quality, easy-to-use tools for both consumers and businesses to communicate and collaborate globally through voice, video and text conversations. Founded in 2003 and based in Luxembourg, our mission is to be the communications platform of choice around the world. We enable users with virtually any Internet-connected device to communicate with each other by voice, video and instant message for free, or make low cost voice calls to fixed or mobile numbers virtually anywhere in the world. We had 124 million average monthly connected users for the three months ended June 30, 2010 and our users placed 95 billion calling minutes over Skype in the first half of 2010, approximately 40% of which were video. Skype can be downloaded onto computers, mobile phones and other connected devices for free at www.skype.com.

Facebook® is a registered trademark of Facebook Inc.
In this article: Facebook, FACEBOOK CONNECT, FacebookConnect, hands-on, skype, skype 5.0, skype 5.0 beta, Skype5.0, Skype5.0Beta, video calling, VideoCalling
All products recommended by Engadget are selected by our editorial team, independent of our parent company. Some of our stories include affiliate links. If you buy something through one of these links, we may earn an affiliate commission.
Share
Tweet
Share