You can pre-order the first official Steam Machines starting today

CyberPower's three-blade gaming PC is built for showing off 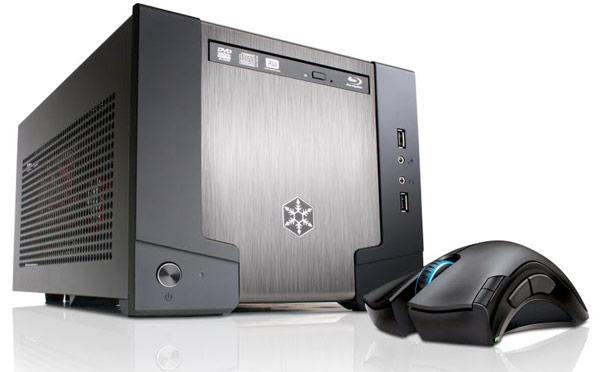 Look out, Shuttle -- CyberPower's getting all up in your territory with its new LAN Party EVO series. Introduced today, this foursome of minuscule monsters relies on mITX and mATX motherboards and plenty of high-end internals to deliver solid gaming performance in a desktop that's at least somewhat portable. The Party EVO Mini is wrapped in a Silverstone SG-07B enclosure, while the Xtreme, Commander, and Ultra tout In-Win's Dragonslayer. Aside from integrating its Max Airflow Package to keep things a couple of notches below "Molten Lava," the whole crew is equipped with a 64-bit copy of Windows 7, a three-year warranty and free lifetime phone support. As for specs, the Mini ($1,079) gets a Core i7-870 CPU, 4GB of DDR3 memory, a 1GB ATI Radeon HD 5770 GPU and a 1TB HDD, while the Xtreme ($799) steps down (oddly enough) to a Core i5-760 and an HD 5670 on the graphics front. The Commander ($999) includes a Core i7-950, 6GB of DDR3 RAM and NVIDIA's GeForce GTS 450 (1GB), and finally, the Ultra ($759) branches out with an AMD Phenom II X4 955 CPU, 4GB of DDR3 memory, ATI's Radeon HD 5670 GPU (1GB) and a full terabyte of hard drive space. So, which is going to be, buster?
Show full PR text

The LAN Party EVO series is the embodiment of the perfect LAN gaming PC. CyberPower has managed to cram everything many LAN-going enthusiasts desire in a series of four compact and stylish gaming rigs that are lightweight, elegant and packed with immense cooling that will allow users to fry their enemies without frying their system.

The LAN Party EVO series is based on small form factor mITX and mATX motherboards that deliver big-sized motherboard features and performance in a small sized form. These motherboards support the latest processors from Intel and AMD, which can be combined with an array of the largest and most powerful graphics card choices from NVIDIA and ATI featuring Direct X 11 visuals.

The LAN Party EVO Mini is known as one of the smallest footprint gaming systems but can accommodate even the monstrous ATI Radeon 5970 graphics card. All LAN Party EVO gaming PCs are installed with a liquid cooling solution to keep the CPU cooled.

All CyberPower PC gaming systems are pre-loaded with Microsoft Windows 7 64-bit Operating System to enhance your gaming and multimedia experience. They also come with a 3-year limited warranty and free lifetime phone support.

The starting price for the new LAN Party EVO systems is $ 759. High performance memory upgrades, and other peripheral components options are available at the company website. http://www.cyberpowerpc.com/LandingPages/LANPartyEVO/

In this article: CyberPower, CyberPower evo, CyberpowerEvo, desktop, evo, Evolution, gaming desktop, gaming pc, gaming rig, GamingDesktop, GamingPc, GamingRig, htpc, lan party evo, LanPartyEvo, mATX, mITX, pc, sff, sff pc, SffPc
All products recommended by Engadget are selected by our editorial team, independent of our parent company. Some of our stories include affiliate links. If you buy something through one of these links, we may earn an affiliate commission.
Share
Tweet
Share