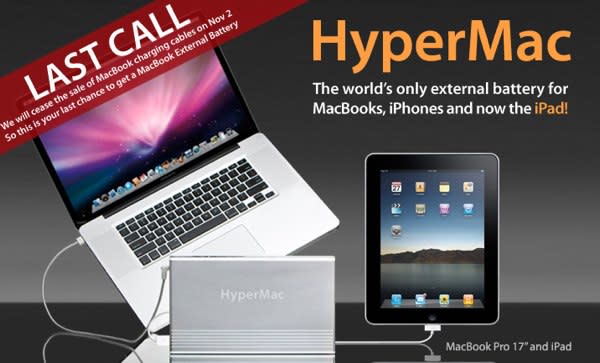 Uh oh, HyperMac just announced that it will cease the sale of MacBook charging cables and car chargers -- on November 2nd at 00:00 US Pacific Time, they'll be gone for good. While the HyperMac batteries will be sold, you won't be able to charge your MagSafe-equipped MacBook without the cable, so what's the point? This, obviously, is the direct result of the patent-infringement lawsuit Apple filed over Sanho's unlicensed use of Apple's MagSafe power connector. And while it may be a victory for Apple legal, it's an unsettling blow to consumers like Engadget editors who need the extra juice to augment the life of Apple's non-removable MacBook, MacBook Air, and MacBook Pro batteries. Read the full statement after the break.

Update: We've spoken with Daniel Chin, President of Sanho Corporation, who tells us that his company is, "in middle of license negotiations with Apple and ceasing the sale of the MagSafe cables was a perquisite for negotiations to go on." So there is still hope for a legal solution to this mess. Otherwise, it'll be soldering guns and X-Acto knives at dawn.

As part of our ongoing comprehensive licensing negotiations with Apple regarding a wide array of technologies and issues, we have decided to cease the sale of the MacBook charging cables and car charger on November 2, 2010.

While we will continue to sell the same batteries together with the rest of our product line after November 2nd, they will not be able to charge MacBooks without the cables.

If you wish to get the world's ONLY external battery and car charger solution that works with ALL MacBook, MacBook Air and MacBook Pro (supports dual voltage) as well as the iPad, iPhone 3/3GS/4, iPod and all other USB devices, NOW is the time.

As we have very limited stocks, do order early to avoid disappointment. We will continue to sell until November 2nd and while stocks last.

We wish thank the many customers who have already gotten the HyperMac External MacBook Battery and those of you that gave us wonderful reviews.

In this article: apple, battery, external battery, ExternalBattery, hypermac, lawsuit, macbook, macbook air, macbook pro, MacbookAir, MacbookPro, magsafe, patent infringement, PatentInfringement, sanho
All products recommended by Engadget are selected by our editorial team, independent of our parent company. Some of our stories include affiliate links. If you buy something through one of these links, we may earn an affiliate commission.
Share
Tweet
Share