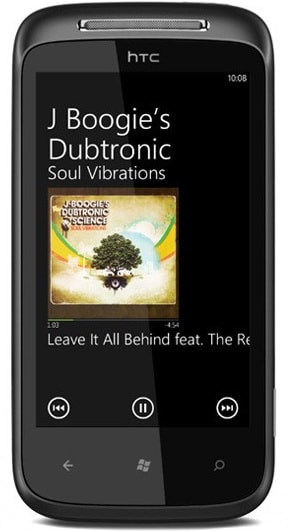 Out of all the Windows Phone 7 launch partners, HTC's obviously been the most hard-working kid in Mr. Ballmer's sculpture class. So here's the question: which of the five launch devices is the Taiwanese company's best work? Well, there's no such thing as a perfect phone, but we dare say the 7 Mozart's the most stylish out of the lot. Not convinced? Flip the phone around and you'll see its two main selling points: its aluminum unibody construction (as applied on the Nexus One and Legend), and its 8 megapixel camera with Xenon flash (as opposed to 5 megapixels with LED flash on the other WP7 devices). Will these goodies suffice to win WP7 fanatics over? Join us after the break to find out.

This review is primarily of the HTC 7 Mozart hardware. Check out our full review of Windows Phone 7 for our thoughts on the OS. How would you rate the 7 Mozart?
We want to hear what you think. Post a quick review now to join the conversation!
Write a review

We've already given away the game earlier, but in addition to the handsome unibody chassis and the 8 megapixel camera (with Xenon flash), there's also the now-common 1GHz Snapdragon chipset, along with a sharp 3.7-inch SLCD (with better color reproduction and viewing angle than the HD7's) and 8GB storage capacity. On the front there are three backlit capacitive buttons below the screen, whereas above the screen you see a shiny grill for the earpiece plus an LED indicator underneath. The remaining buttons -- all in matte silver -- are located on the sides: volume rocker on the left, power button at the top (where the 3.5mm headphone jack resides as well), and the two-stage camera button at the bottom right. Before we move to the back, we'd like to make a little complaint about the screen's two side edges: they're pretty sharp. Not the knife kind of sharp, but sharp enough to cause discomfort. This is particularly noticeable when we brush our thumbs across either edge, which almost feels and sounds like stroking the edge of some paper card.

Things get a whole lot more interesting when you turn to the back of the 7 Mozart, and we will confess: there have been moments where we spent minutes just quietly admiring HTC's artwork from all sorts of angles. There's a certain dynamism in the non-symmetrical design that keeps us absorbed. In brief, imagine a hollow block of aluminum with large parts of its top-left and bottom-left corners sawn off on the backside, and then there are two triangular rubber pieces -- same material as battery door on the Desire and Trophy -- that cover up the holes. But that's not all: the key to this seductive sculpture is the triangular dent milled onto the metal, which not only steals your attention with its highlights from various angles, but we also suspect that this is a subtle homage to HTC's previous logo. Cute.

Going back to the rubberized triangles: the top one -- which houses the camera, Xenon flash, power button and headphone jack -- is not user-removable; whereas the bottom one doubles up as a fully detachable battery cover plus an antenna (so don't lose it!), and underneath it lies a flap that stops your battery from slipping off -- basically just like the Legend. As for battery life, we managed to get somewhere around seven to eight hours of typical usage, which is pretty standard for smartphones these days; however, it'll be interesting to see what happens when we get more third party apps that support background notification.

37
Now, onto the less happy things. What we're most annoyed with is the positioning of the volume rocker -- it's OK for right-handed holding, but it's definitely too low for our left hand. Since the rocker isn't where we expect it to be, a lot of the times we found ourselves close to slipping our thumb on the metal instead, therefore also risking dropping the phone. Another problem stems from the camera -- HTC's cunningly sunk the lens glass below the ring to reduce the chances of the glass being scratched, but we have a feeling that due to the ring's sharp inner side, the lens has been trapping a lot of lint that way. And finally, we'd like to make a little complaint about the screen's two side edges: they're kinda sharp. Not the knife kind of sharp, but sharp enough to cause discomfort. This is particularly noticeable when we brush our thumbs across either edge, which almost feels and sounds like rubbing the edge of some paper card.

Just a quick note on the accessories: the handsfree kit is the same as the ones bundled with the latest Android handsets from HTC, i.e. over-sized and no noise isolation. Nice remote, but it's just too bad that the phone doesn't support double-tap to skip songs.

Unless you've been hiding in a cave over the last few months, you should be well aware that Microsoft's been laying some serious ground rules for strictly no skinning on WP7, which means companies like HTC can't port a similar experience from their Android or even Windows Mobile 6 offerings. To get around this, HTC came up with the HTC Hub app. Now, to be brutally honest, this is hardly a replacement for Sense; rather than a skin or even a widget, the Hub's more like a weather app stuffed with a portal to a handful of HTC apps.

Let's run through the apps quickly. Photo Enhancer is rather simple and self-explanatory -- you just load up a picture, apply one of the 14 filters (auto enhance, cinnamon, vintage, sepia, etc.), and then save the result as a new file. We'd love to see this built into the camera app, but we have a feeling that Redmond's already said no. Next we have Sound Enhancer, which offers a set of audio effects: Dolby Mobile, SRS Enhancement, and headphone equalizer. We weren't convinced by Dolby Mobile -- the resultant audio had a wider soundstage, but it also sounded very bland to us; SRS Enhancement, however, provided some interesting bass extension. The remaining HTC apps shouldn't need much explaining: Stocks, Notes, Converter, and Connection Setup (for carrier networks). They all worked flawlessly for us as well.

On our particular review unit, Orange has also thrown in a couple of apps: Orange Daily is essentially a news reader with Twitter and weather add-ons, but neither of those two features worked for us; the second app Orange Wednesday lets you check out new film releases and find nearby cinemas, but it was slow and buggy for us. Sounds like a premature app to us -- let's hope Orange can patch things up real soon.

Finally, we're now touching the last of the 7 Mozart's two selling points -- its 8 megapixel autofocus camera. The number sure sounds impressive compared to the other 5 megapixel WP7 phones, but as we all know, quality comes before quantity. Sure enough, our photos weren't as spectacular as we had hoped -- the one post above is the best of the bunch, while most of the rest are a too soft and appear washed out. Sadly, there's not much you can do about this in the camera app's settings, as it appears that HTC's chosen to keep things simple and have hidden all the various options -- ISO, EV, sharpness, metering, wide dynamic range, etc. -- that the Samsung Omnia 7 features. Camcorder performance is even more disappointing. As we've seen on other HTC devices, the 7 Mozart suffers from the same frame rate reduction issue when filming in low light condition. We've also noticed that its autofocus speed isn't ideal, and the rolling shutter effect doesn't add any merit, either. For the sake of comparison, we should mention that the Samsung Omnia 7 doesn't have these problems, or at least it doesn't perform that badly. As usual, we've attached a sample clip here as evidence:

So let's gather our thoughts for a moment. The 7 Mozart is no doubt one of the most stylish WP7 devices right now, bearing HTC's usual top-notch build quality. Likewise with the software: both the OS and the HTC apps ran well on our device, which again testify HTC's phone-manufacturing skills. Of course, potential buyers should take note of the comparatively smaller 3.7-inch screen to suit their needs -- you may have to squint a tad closer, but in return you get a more pocket-friendly form factor, plus the screen quality here is actually better than what we saw on the HD7's 4.3-inch monstrosity. Our only serious disappointment is with the subpar camera performance and shoddy earphones -- both typical of HTC these days, it seems. Well, the choice is yours, friend.
In this article: 7 mozart, 7Mozart, cellphone, featured, features, htc, htc 7 mozart, htc hub, Htc7Mozart, HtcHub, mobile phone, MobilePhone, Mozart, orange, orange uk, OrangeUk, phone, review, smartphone, unibody, video, windows phone 7, WindowsPhone7, wp7, xenon, xenon flash, XenonFlash
All products recommended by Engadget are selected by our editorial team, independent of our parent company. Some of our stories include affiliate links. If you buy something through one of these links, we may earn an affiliate commission.
Share
Tweet
Share