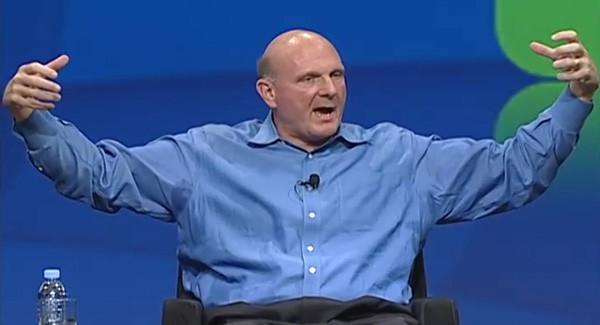 Windows 7 might be a massive commercial success and an undeniably rock solid piece of software, but Microsoft is apparently unwilling to rest on those soft and cozy laurels. Asked about the riskiest product bet the Redmond crew is currently developing, its fearless leader Steve Ballmer took no time in answering "the next release of Windows." His interviewers sadly failed to probe any deeper on the subject, but it might be notable that Steve calls it the next release rather than simply Windows 8, while the idea of it being risky also ties in with previous indications that Microsoft is aiming for a revolutionary leap between iterations. We'll have to just be patient and wait for more on that, though if you'd like a peek at Steve dodging question on tablets and the potential for Windows Phone 7 appearing on them, you need only jump past the break for the video.

Update: It's also worth noting that Ballmer may not have been talking about revolutionary leaps as much as he's referencing the past issues the company has had when it's issued a major OS update (hello, Vista). The idea that making any big change to the operating system most of the world runs would invite a certain amount of high risk makes sense to us.

In this article: ballmer, ceo, future, gartner, gartner symposium, GartnerSymposium, interview, microsoft, plans, quote, risk, risky, roadmap, steve ballmer, SteveBallmer, windows, windows 8, windows next, Windows8, WindowsNext
All products recommended by Engadget are selected by our editorial team, independent of our parent company. Some of our stories include affiliate links. If you buy something through one of these links, we may earn an affiliate commission.
Share
Tweet
Share