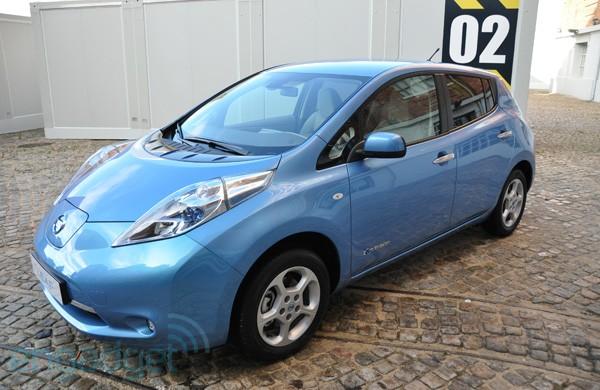 26,000 people can't be wrong, right? That's the current tally of Leaf pre-orders that Nissan has collected from US and Japanese drivers excited by its all-electric hatchback. Yesterday, the car that's built to plug into the same wall outlet as your toaster held its official pan-European launch party -- with the UK, Ireland, Netherlands, and Portugal getting the first deliveries in early 2011 -- and we were on site to grab a few closeup pictures and some precious time in the driver's seat. American drivers should look out for a new set of keys in their mailbox this December, so there's probably no better time than now to give them a preview of what they're getting themselves into. Jump past the break for more on the Nissan Leaf. Let's set everything else aside for a moment and just focus on what the Leaf is like for its most important passenger: the one with the steering wheel in his (or her) hands. Upon placing your derriere within its very comfortable seat, the Leaf presents you with that signature of Japanese cars: a button-rich control scheme augmented with a wide variety of information readouts to saturate your eyeballs with. It's mildly intimidating, but in fact you can ignore the entire steering wheel control hub if all you want to do is get moving. The Leaf's driving controls couldn't be simpler: there's a rotund stick taking the place of your usual gear shift, used to switch between Drive, Reverse and Eco modes, while starting up the vehicle is just the press of a power button away. Once you're in Drive, there's just two pedals and a steering wheel to contend with.

When you do get going, the first sensation you'll experience will actually be a feeling of desensitization. You'll get none of your usual feedback when starting up a car, such as that reassuring engine hum and its concordant elevation to a menacing noise as you gain speed. Nope, you just press on the accelerator, the car gets moving, and you'd better be paying attention to what's going on outside the windshield if you want to stay informed. It's unfamiliar, but not unnatural, and grows into a real pleasure of serenity, which is only amplified by the car's generally very smooth ride. Wind and tire noise start to be felt as you reach above 50kph (31mph), but only subtly. The Leaf's built-in pedestrian alert system is pretty much inaudible inside the car itself.

Acceleration on the Leaf took us by surprise, this thing can really take off. Its performance is no doubt helped by the available 207 pound-feet of torque, which you can tap into right from the off, there's no need to wait for an engine to ramp through the gears. Electric vehicles (at least the affordable ones, Mr. Tesla) have tended to be perceived as the dull eco-geeks of the motoring world, but there's no denying Nissan's claim that the Leaf is a fundamentally fun car to drive. There's a simple pleasure in its rapid acceleration which encouraged us to exploit every opportunity to test it. Both the accelerator and the brake pedal are responded to instantly, and with great effect. We might claim we were "testing" how hard the brakes were when we threw ourselves and our passenger forward at one point, but the fact is the Leaf responds to a feathery touch and anything more sincere gets correspondingly strong results. Needless to say, we like that a lot.

All the same, the Leaf doesn't expect to be gracing posters atop boy riders' walls. It's billed as a transporter for families and city dwellers, for whom things like top speed (140kph / 87mph) and 0-60 numbers will be far less important than the ability to pull away from traffic lights in a reliable, even impressive, fashion. The software side of things also leans toward tamer driving, with a "tree-growing" indicator up at the top of the driver display giving you visual cues about how good your driving is. Bash the accelerator too hard and and slam the brakes, and your tree will start to degenerate. Be a smooth operator with a gentle touch and you'll get multiple trees on your display as reward for such conscientious driving. The rest of the info panels provide handy information like the range you can go on the current charge (under current driving conditions) and how much power the motor is using at the given moment.

The Leaf even has an Eco mode, wherein it turns on regenerative braking and sucks in its stomach to really optimize your range (and minimize your environmental impact, of course). We found that our test car's max range jumped from 134km (83 miles) to 151km (94 miles) when we flipped it on. On that subject, Nissan reps told us hot weather can impact what you get out of your batteries by as much as 40 percent, but that's when you're talking about scorching, unbearable heats and with bad driving bundled into the equation. Very cold climes (sub-zero degrees Celsius) can also expect to suffer a penalty for their deviation from the equator by having to warm up the batteries before the car can be started up.

The Windows Embedded Automotive center console display is filled with additional options, such as setting charging timers and looking at your range superimposed on a map, all of which appear to be both sensible and useful. Check out our test drive gallery above for screen grabs and more details.

An iPhone app has been developed for the Leaf, which will hook up to the car via a centralized global data hub in Japan. Alas, the app is still at its prototyping stage and Skynet the tracking center isn't yet online, so we couldn't see it in action for ourselves. What we're promised is the ability to set up and time charging through the phone, turn on the air conditioning remotely, and check on battery status and levels. An additional web interface is in the works which will also allow you to plan a route online and then beam it down to your Leaf (via its integrated 3G connection) for later use.

It's worth spending a moment on the Leaf's physical design as well, as it really outdid our expectations when actually seen in person. In spite of its pretty average outward size, which humorously enough classifies it as a "large" car in Japan, a "medium" in Europe and a "small" in the US, the Leaf was extremely spacious. Its boot can fit 330 liters, while passengers are attended by extremely comfy seats and plenty of leg and elbow room. That applies with equal force to the rear seats (which rest atop the bulk of the battery pack) as it does to the front. You could easily fit three people in the back, with none of them having to feel crammed in. The way the entire car is outfitted, inside and out, conveys a sense of high quality materials and exacting attention to detail.
A great example of that are the oversized headlights. We found them rather alien, but their bulbous shape actually serves a pretty important function that has to do with acoustic aerodynamics. Basically, because the Leaf is so darn quiet on the inside, outside noises tend to seem rather more significant than usual (we learned that by turning on the AC, whose operation was much more noticeable within the Leaf than your usual four-wheeler), so Nissan has gone and designed the headlights so that, when the car's in motion, they create a vacuum immediately behind them, thereby serving to deflect extrerior noise away from the driver and front passenger's side windows. Very clever.

As we mentioned above, the Leaf will be pluggable into regular household power outlets (but only after Nissan has your house's electric setup checked) and the promise is that it will charge fully within eight hours. There's also the option to have a dedicated charging station installed at your place, which can cost up to or around £1,000 ($1,575) in the UK, while Nissan is pushing hard to get quick-charging infrastructure rolled out across Europe, which will get you back up to full within 30 minutes. If you want an estimate on running costs, Nissan's UK Leaf reservations cost £257 ($403), which the company advertises as the projected cost of electricity to run the car for a year. Reps here also tell us the Leaf will set you back 15 percent less in maintenance costs than conventional cars, mostly because there's almost nothing to maintain beyond the brake discs and cooling systems. Finally, the price in the UK will be £24,000 ($37,784) after a £5,000 government subsidy, while in Europe you're looking at a €30,000 ($42,050) cost after subsidies.

Nissan spent a little time discussing its battery tech with us as well, congratulating itself on the breakthrough four-layer module design, which packs twice the energy density into the space, emits less heat, and is more durable and easily stacked by virtue of its shape. You'll find 48 of these modules lining the floor of each Leaf, storing up to 24kWh of pure electric energy. We're being promised that 80 percent of that maximum capacity will still be available after five years, which coincidentally happens to be the length of Nissan's warranty for the EV parts in the Leaf. Notably, that's significantly less than the eight-year pledge made to American buyers, though the only answer we were given was that they are "different markets" and therefore the offering is different.
While it may not emulate the vehicles of Blade Runner (we knew that idea was too good to be true), the Leaf's pedestrian alert still gives you a satisfyingly futuristic whirr to woo passers-by with. Hear it below.
In this article: car, carwings, drive, driven, driving, electric, electric car, electric vehicle, ElectricCar, ElectricVehicle, europe, european, ev, hands-on, impressions, launch, leaf, lisbon, nissan, nissan leaf, NissanLeaf, portugal, preview, test, test drive, TestDrive, video, windows embedded, windows embedded automotive 7, WindowsEmbedded, WindowsEmbeddedAutomotive7, zero emissions, ZeroEmissions
All products recommended by Engadget are selected by our editorial team, independent of our parent company. Some of our stories include affiliate links. If you buy something through one of these links, we may earn an affiliate commission.
Share
Tweet
Share