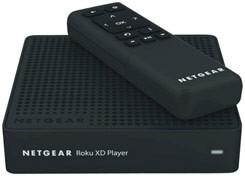 Aw, suki suki now! Roku -- the guys responsible for taking over your living room -- just announced that it's making its hardware and software platform available to license. At first glance, you may assume this means little to nothing for consumers, but you're (hopefully) mistaken. If you'll recall, the Roku XD was rebranded in order to slip into Netgear's vast sales channels, but the software part of this equation has our interest very much piqued. We've already seen Vudu's software baked into a number of HDTVs, and we're envisioning a future filled with world peace, In-N-Out for all and Roku-embedded television sets. We'll take two outta three if we have to, though.

Saratoga, Calif. – October 27, 2010 – Roku, Inc., maker of the best-selling and award-winning Roku streaming player, today announced that its hardware and software platform is available to license, giving consumers more ways to access the power of the Roku player in their living room, playroom or on any television in their home. The company also announced its first licensee, NETGEAR®, who has taken the recently introduced Roku XD streaming player and began selling it under the NETGEAR brand in retail stores including Best Buy, Fry's and Radio Shack.

"Roku has built an open platform that has been enthusiastically adopted by content providers, many choosing Roku as the first product to launch their service into the living room," said Anthony Wood, founder and CEO of Roku, Inc. "With today's announcement we are broadening our reach and giving many more consumers access to our product and all the great content it contains, whether they shop on-line or in retail stores."

First introduced in May 2008, the Roku streaming player provides an easy, affordable, and reliable way for hundreds of thousands of Netflix customers to watch movies and TV shows instantly on their TV. Since the launch of the Roku Channel Store last fall, all Roku customers now have access to over 85 channels from 50 unique content services, with more added all the time.

Roku players already deliver the largest collection of streaming content available for the TV including over 100,000 movies and TV shows from Netflix (NASDAQ: NFLX), Amazon Video On Demand (NASDAQ: AMZN), and later this fall, Hulu Plus; live and on-demand sports from MLB.TV and UFC; music from Pandora, MP3tunes, MOG, and TuneIn Radio; photo and video sharing from Flickr, Picasa, Vimeo, and Facebook; plus news and entertainment content from around the world.

The market leader in streaming entertainment devices for the TV, Roku has always believed that anything you want to watch, listen to, and enjoy should simply be there on your TV, whenever you want it. Roku streaming players are renowned for their simplicity, variety of entertainment choices, and exceptional value. Roku is privately held and based in Saratoga, Calif. For more information on the company and its products, visit: http://www.roku.com.

In this article: business, connected hdtv, ConnectedHdtv, content, display, embedded, hdtv, industry, license, media streamer, MediaStreamer, netgear, oem, partner, partnership, programming, Roku, software, stream, streamer, streaming, television, tv
All products recommended by Engadget are selected by our editorial team, independent of our parent company. Some of our stories include affiliate links. If you buy something through one of these links, we may earn an affiliate commission.
Share
Tweet
Share