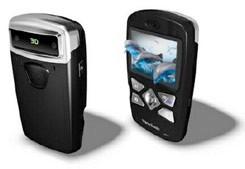 There's a good chance this 3D bandwagon may never stop rolling, so rather than maintaining that bitter beer face for yet another day, you may as well embrace the next dimension. Viewsonic's newest pocket camcorder just so happens to fit into that segment, as the 3DV5 is a 720p shooter with a 2.4-inch autostereoscopic display, not unlike that found on Nintendo's 3DS. According to the company, there's a one-touch function to switch between 2D and 3D recording modes, and once owners have logged the latter, they can either plug it directly into a 3D HDTV (via HDMI) or watch it on-screen without any 3D glasses. Users can also throw these up on YouTube's 3D channel if they'd rather tangle with a set of anaglyph spectacles, but you'd probably budget for an SD card -- you know, considering that the 10MB of internal storage space won't exactly hold a masterpiece. Is this guy really worth £150 ($238)? Can you really live another day without the ability to create 3D content?

28 October 2010, London, UK – To address the difficulty that many are facing in creating their own 3D content, ViewSonic has announced the launch of its easy-to-use 3D HD camcorder. With an estimated SRP of only £150, the ViewSonic 3DV5 makes it easy for anyone to record their own 3D movies and watch them back on their 3D-ready TV, monitor or projector.

The ViewSonic 3DV5 is simple to use, featuring a one-touch recording function and the ability to quickly switch between 2D and 3D recording modes. Once users have recorded their content, then they can either plug the camcorder into their computer via USB, or plug it directly into a 3D TV using the included HDMI cable. There is also the option to watch the content in 3D on the device, without the need for 3D glasses, thanks to the built-in 'autosterescopic' display. Videos can also be uploaded directly to YouTube's 3D channel and watched in 3D using the supplied 'anaglyph' glasses, even if using a standard 2D display.

"Everyone has watched 3D movies at the cinema, and lots of people are considering purchasing a 3D compatible display, whether a TV, monitor or projector. However, there is a lack of available 3D content, and people want to create 3D content that they will be able to watch for years to come," says James Coulson, European product marketing manager, ViewSonic. "The ViewSonic 3DV5 makes it easy for anyone to create future-proof, high quality 3D home movies and also shoot in standard 2D. As well as being easy to use, the camcorder is also excellent value for money, and will make a great gift this Christmas."

The ViewSonic 3DV5 features an autosterescopic 2.4" screen, as well as a Li-Ion battery which can be charged via USB. The camcorder is able to film content in MP4 format at HD 720p resolution, and can also take still images. There is 10MB of internal memory, which can be increased using an SD card.

In this article: 3d, 3d camcorder, 3dCamcorder, 3DV5, 720p, autosterescopic, camcorder, hd camcorder, HdCamcorder, pocket camcorder, PocketCamcorder, Viewsonic
All products recommended by Engadget are selected by our editorial team, independent of our parent company. Some of our stories include affiliate links. If you buy something through one of these links, we may earn an affiliate commission.
Share
Tweet
Share