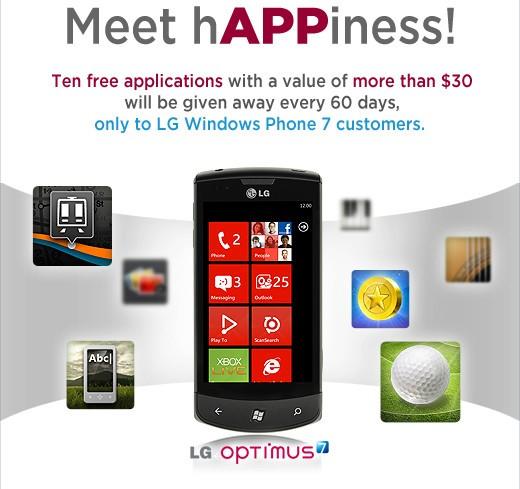 Windows Phone 7 launched with a dizzying variety of handsets. On closer inspection though, all nine WP7 devices hitting retail space in 2010 feature the same processor and display resolution. So outside of a few notable hardware variations, software is going to be a big differentiator for consumers. That's why LG has teamed up with Microsoft to offer a revolving portfolio of free, so-called "quality" apps to owners of LG Windows Phone 7 handsets. Ten free apps valued at more than $30 will be given away every 60 days via the LG Application Store -- that's 60 apps per year. These are in addition to the free apps already developed exclusively for LG handset owners like the PlayTo media streaming app we fawned over during our Optimus 7 review. Keep it up LG and your mobile handset division might finally pull itself out of the ditch. See the first ten apps listed after the break.

LG and Microsoft collaborate on developer program for a new mobile platform.

SEOUL, South Korea - Nov. 4, 2010 - LG Electronics (LG) and Microsoft Corp. (Nasdaq "MSFT") announced today that they are teaming up to provide customers with a free selection of quality applications for LG customers with Windows Phone 7 handsets. LG and Microsoft will subsidize a revolving portfolio of hand-picked applications, providing free access to quality applications that take advantage of the unique features and design of Windows Phone 7.

Selected Windows Phone application developers will be provided with exclusive marketing opportunities and resources to promote their applications with LG. Developers of selected applications will benefit from promotional support through LG's marketing presence and Microsoft's Windows Phone Marketplace. LG will promote the new applications through in-store sales events and on the LG Mobile Global Facebook page (http://on.fb.me/bltMvp), creating a larger market for developers and bringing them closer to their audiences.

"When we pledged early last year to support Microsoft's smartphone strategy, we knew we were making a decision that had the potential to generate ripples in the ecosystem," said Chang Ma, vice president of the Mobile Communications (MC) Marketing Strategy Team at LG. "Microsoft's commitment to the developer community is well known and respected in the industry, and we look forward to seeing this partnership with Microsoft lead to greater things."

"We built the new Windows Phone Marketplace to create new business opportunities for developers and partners alike," said Brandon Watson, director for Windows Phone at Microsoft. "This collaboration with LG creates a win-win situation for consumers and developers and will further showcase the variety of quality games and applications available on Windows Phone 7."

What's more, LG will also be offering its Windows Phone 7 customers free access to even more applications developed directly by the company. These applications will also be available from the LG Application Store and will span social networking services, such as Type n Walk and Voice SNS, as well as practical tools like Subway AR.

LG and Microsoft's developer program will kick off in November. More information can be found at http://www.facebook.com/LGMobileHQ.