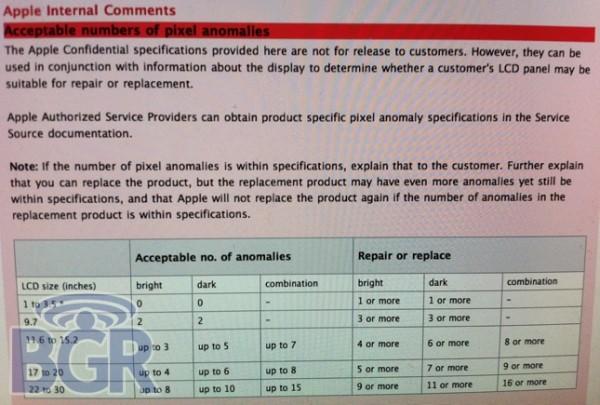 There's nothing quite like coming home with a shiny new laptop only to find tiny black and white dots peppering your LCD, especially when the screen's manufacturer tells you that you're plumb out of luck. If you buy Apple, that scenario might honestly play out just the same, but the chart above could save you an embarrassing argument at your local Genius Bar. According to the allegedly leaked internal document, Apple has a set of precise charts that determine whether or not it will replace your LCD -- a single dead pixel will save an iPod or iPhone, for instance, and Apple will tolerate only two on an iPad IPS screen. We're sorry to say it's not the same if you buy Mac, as you could have a staggering fifteen dead pixels on that pricey Cinema Display and still have to pick up the tab. Hang on to those receipts, folks.
In this article: apple, broken, customer service, CustomerService, dead pixel, dead pixel policy, dead pixels, DeadPixel, DeadPixelPolicy, DeadPixels, display, displays, iMac, iPad, LCD, Macbook, Macbook Air, MacbookAir, pixel, policy, returns, screen, screens, stuck pixel, stuck pixels, StuckPixel, StuckPixels
All products recommended by Engadget are selected by our editorial team, independent of our parent company. Some of our stories include affiliate links. If you buy something through one of these links, we may earn an affiliate commission.
Share
Tweet
Share