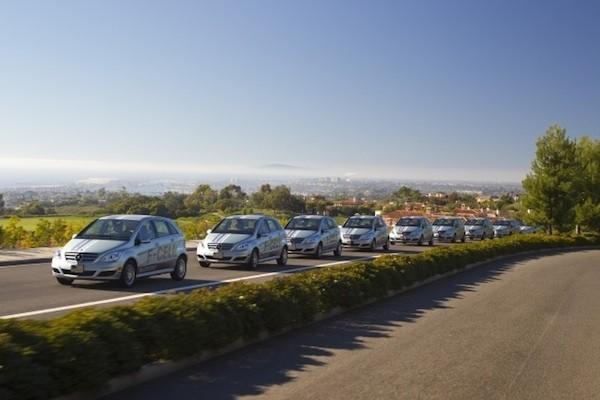 It's unfortunately not the F800 Style "research vehicle" the company is working on, but those looking to avoid a hybrid or all-electric vehicle in favor of fuel cell technology can now place an order for Mercedes-Benz's new B-Class F-Cell vehicle. Those orders actually first opened up in October, but the automaker has only just recently revealed the actual cost to customers. That will be $849 a month on a lease-only basis, which may seem a tad high but does include both fuel and insurance (alright, so it's still high). As you might expect, however, the car won't exactly be widely available -- Mercedes-Benz says the first few will reach "selected" customers by the end of this year, with "at least 70 more" set to become available in the Los Angeles and San Francisco area by 2012. Full press release is after the break.
Show full PR text
Mercedes-Benz B-Class F-CELL: Mercedes-Benz brings the latest fuel cell fleet to the USA
Stuttgart

Right in time for the Los Angeles Auto Show, Mercedes-Benz is presenting the new B-Class F-CELL as the first fuel cell powered electric car produced under series production conditions in the USA. The first vehicles will be handed over to selected customers before the end of this year. In 2012 a total of around 70 of these environmentally friendly cars, which are being made available on a rental basis, will be operating on a daily basis in California.

"California, with its almost traditionally demanding and restrictive environmental regulations, is the ideal region for day-to-day operation of a genuine Zero Emission Vehicle," says Dr. Thomas Weber, member of the Daimler AG Board of Management responsible for Group Research and Development for Mercedes-Benz Cars. With the model year 2011 B-Class F-CELL, Mercedes-Benz is the first manufacturer to date to bring a fuel cell powered Zero Emission Vehicle onto the roads which has been certificated by the EPA (Environmental Protection Agency) and CARB (California Air Resources Board). Dr. Thomas Weber: "After more than 580,000 kilometers covered with the A-Class F-CELL trial fleet in practical operation, we will continue to build on our experience with the latest generation of electric cars with fuel cell drive. The 70 B-Class F-CELL cars in customer hands in California alone are more than twice the size of the U.S. A-Class fleet and a further milestone on the way to market maturity of this technology by 2015."

With an operating range of around 400 kilometres and short refuelling times, the Mercedes-Benz B-Class F-CELL combines locally emission-free mobility with long-distance comfort and compelling performance figures. The technical basis for the drive system of the B-Class F-CELL is the optimised, latest-generation fuel cell system. This is some 40 percent smaller than the system in the A-Class F‑CELL, which has been undergoing practical trials in the USA since 2004, but generates 30 percent more power while consuming 30 percent less fuel. The cold-start capability of the B-Class
F-CELL is down to minus 25 degrees Celsius.

In the current B-Class F-CELL the 100 kW/136 hp electric motor, which develops a powerful torque of 290 Nm from the instant the engine starts to turn, delivers driving pleasure and dynamism on a par with a two-litre petrol model. At the same time the B-Class F-CELL achieves an NEDC consumption (New European Driving Cycle) equivalent to only 3.3 litres of fuel (diesel equivalent) per 100 kilometres. Fuel consumption according to the US test cycle FTP combined EPA-Label (Federal Test Procedure) is 54 mpg.

Everyday use by customers

This vehicle concept is suitable for everyday driving and highly impressive: during the NHA Hydrogen Conference & Expo in May 2010, California's Governor Arnold Schwarzenegger was enthusiastic: "I would love one of these fuel cell powered Mercedes cars!" On the basis of market research data, Mercedes-Benz has chosen a representative customer group consisting of fleet operators, public institutions, public figures and private customers. The primary aim is to gain further experience in day-to-day operation which can then be incorporated into succeeding model series. The full-service rental rate is 849 US Dollars excl. tax, with a contractual duration of up to 36 months.

At the heart of the B-Class F‑CELL is the new-generation electric drive system powered by a fuel cell, which is compact, powerful, safe and fully suited for everyday use. The fuel cell generates the electrical power on board from a chemical reaction between oxygen and hydrogen, producing only pure water and zero emissions. The key drive components are located in the sandwich floor, where they are protected and do not take up much space, leaving the vehicle's interior and trunk fully usable. This makes Mercedes-Benz the first manufacturer to produce a fuel cell based electric drive system in a series-production compact car. Vehicle safety also benefits from accommodation of the tanks within the sandwich floor, and is at the very high level to be expected of a Mercedes.

The integrated safety concept of the B-Class F‑CELL takes the specific characteristics of the innovative drive system into account. The experience garnered over many years by Mercedes-Benz with the electric drive powered by fuel cells from the A-Class F‑CELL and the high-voltage technology involving the lithium-ion battery from the S 400 HYBRID went into honing the concept. The high level of safety means that Mercedes-Benz fuel cell vehicles can use underground car parks, multi-storey car parks or tunnels with no restrictions whatsoever. The vehicle configuration also results in particularly safe and agile handling characteristics.

The hydrogen used to run the fuel cell is stored in three tanks at a pressure of 700 bar. Each tank holds just under 4 kilograms of the gaseous fuel. The tanks are hermetically sealed from the outside world, preventing the escape of hydrogen into the atmosphere even if the vehicle is left to stand for long periods. Thanks to the high compression ratio, the B-Class F‑CELL can cover long ranges of up to 400 kilometres with the tanks full, over twice as far as the A-Class F‑CELL of 2004. Once the tanks are empty, they can be filled simply and quickly in less than three minutes, thanks to a standardised refuelling system.

In order to further the commercialization of fuel cell powered vehicles, Mercedes-Benz is involved in the California Fuel Cell Partnership (CaFCP), an association of automobile manufacturers, energy suppliers, government bodies and technology companies, as well as in the newly formed Fuel Cell and Hydrogen Energy Association (FCHEA).

While the CaFCP is currently furthering the transition from a demonstration project to early commercialization of fuel cell drive systems at all levels, the State of California has already made $27 million available towards the development of a hydrogen infrastructure, with an additional $14 million anticipated in 2011.

There are currently five public hydrogen filling-stations in the greater Los Angeles area, with four more due to be opened by the end of 2010 and one more in the San Francisco Bay area.

* Purely electrically driven vehicle with an operating range of around 400 kilometres in the NEDC (New European Driving Cycle)
* A chemical reaction between oxygen and hydrogen produces electric power which is fed to an electric motor
* Water is the only emission
* The liquid-cooled lithium-ion battery as the energy provider has a storage capacity of more than 1.4 kWh
* The vehicle has front-wheel drive
* Designed as a compact family car with full day-to-day suitability, the B-Class F-CELL consumes the diesel equivalent of only 3.3 litres of fuel per 100 kilometres in the NEDC

Cold-start capability down to -25 °C
In this article: b-class, f-cell, fuel cell, FuelCell, hydrogen, hydrogen fuel cell, HydrogenFuelCell, mercedes, mercedes benz, mercedes-benz, MercedesBenz
All products recommended by Engadget are selected by our editorial team, independent of our parent company. Some of our stories include affiliate links. If you buy something through one of these links, we may earn an affiliate commission.
Share
Tweet
Share