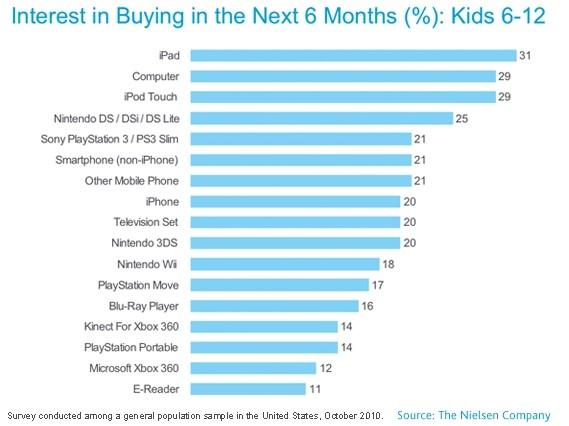 Hey look, a chart with the iPad on top. Aren't statistics fun? And yet, this chart may not mean quite what you think it does. The Nielsen Company presented a cadre of individuals with a list of nice, shiny gadgets and let them cross off anything and everything they'd like to buy in the next six months, and 31 percent of kids 6-12 picked the iPad as one of them. That doesn't mean these youngsters wanted the iPad any more than a game console, mind you, it just means more of them picked the tablet than any other single game console on the list. Also, it turns out that the iPad was the only tablet PC available, so it could well have served as a proxy vote for other slates -- Galaxy Tab, anyone? The survey results also don't factor in ownership, so if the Xbox 360's low on the buy list, it could be because respondents already have one... but we suppose this is the definitive proof we've been searching for that e-readers are on the outs in the 12-and-under crowd. Jeff Bezos is crying over his evening oatmeal right now. After the break, see what the same chart looks like for teenagers and adults. (Hint: they aren't all that hot on handhelds.)

In this article: Apple, Apple iPad, AppleIpad, chart, graph, Nielsen, statistic, statistics, tablet, tablets, Tablets PC, TabletsPc, the nielsen company, TheNielsenCompany
All products recommended by Engadget are selected by our editorial team, independent of our parent company. Some of our stories include affiliate links. If you buy something through one of these links, we may earn an affiliate commission.
Share
Tweet
Share