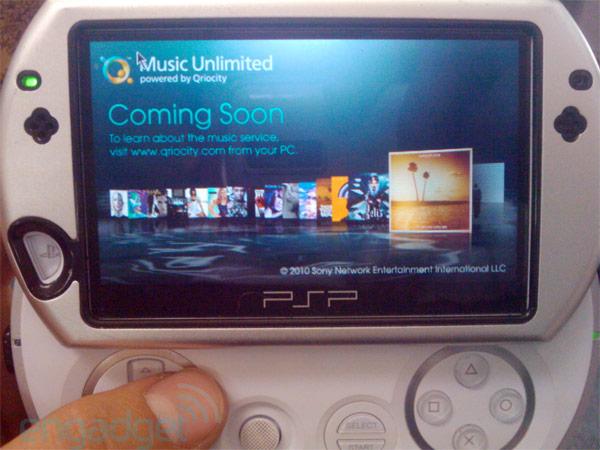 Just days after Sony's Qriocity video-on-demand service went live across Europe, in flies this -- news that the aforesaid service will be spreading its wings and touching the PSP in short order. Word on the street has it that the next PlayStation Portable update (v6.35) will bring along Music Unlimited powered by Qriocity, described as a "new, cloud-based, digital music service from Sony that will give music lovers access to millions of songs stored and synchronized through the cloud." Post-update, users will notice a new icon in the PSP's XrossMediaBar under the 'Music' category, and moreover, the Media Go application for managing PSP downloadable content on your PC will be updated "with enhancements to the user interface and advanced photo editing tools." Sony's remaining mum on a launch date, but the internet is already abuzz about what this may mean for the impending PlayStation Phone. Will Sony finally have a leg-up over iOS with an ingrained unlimited music client? A boy can dream, can't he?

Update: Tipster Isaac spotted the screen above and the one after the break on his PSPgo today. Looks like the launch may be sooner than we'd imagined, eh?

In this article: audio, digital downloads, DigitalDownloads, firmware, media go, MediaGo, music, playstation, playstation portable, PlaystationPortable, psp, Qriocity, software, sony, unlimited music, UnlimitedMusic, XMB, XrossMediaBar
All products recommended by Engadget are selected by our editorial team, independent of our parent company. Some of our stories include affiliate links. If you buy something through one of these links, we may earn an affiliate commission.
Share
Tweet
Share