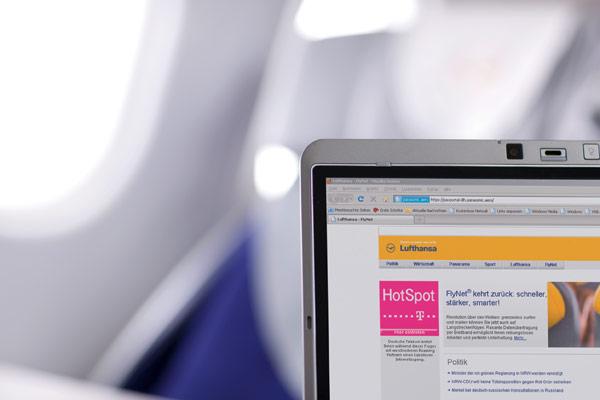 There's just no two ways about it: what Lufthansa has managed to accomplish here is nothing short of incredible. While avid jetsetters have been enjoying in-flight WiFi on (select) domestic routes for a few years now, the in-flight fun has been coming to an abrupt halt when boarding a flight requiring a passport. The dream of long-haul in-flight internet has felt like a distant one, but it seems that the future is indeed happening today. The carrier's FlyNet service has been relaunched this week, and with assistance from Panasonic and the 802.11n gods that be, it's now offering broadband internet access on intercontinental routes. At first, the service will be limited to select North Atlantic routes, but access should be available on "nearly the entire Lufthansa intercontinental network by the end of 2011."

No specific performance figures are being released, but the company does call it "extremely fast" and quick enough to open large attachments "without delay." Better still, the airline will be enabling cellphone data access (GSM and GPRS) in the spring of next year, giving highfalutin' bigwigs the ability to send and receive the most expensive text messages of their life. Deutsche Telekom will be providing the actual internet service, with pricing set as such: €10.95 (or 3,500 miles) for one hour or €19.95 (or 7,000 miles) for a 24-hour pass that also allows patrons to access the web on "on all Lufthansa connecting flights equipped with a hotspot during the period of validity as well as after the flight in Lufthansa lounges." Oh, and did we mention that it's totally free through January 31st, 2011? It is.

Update: We're seeing expected uplink rates of 1Mbps, with download rates reaching 5Mbps. Not bad for being over an ocean.

Lufthansa passengers travelling on long-haul flights can now once again enjoy the full freedom of online communication. Together with its long-standing partners Panasonic Avionics Corporation and Deutsche Telekom, Lufthansa will be the first airline to offer its customers broadband Internet access on intercontinental routes. The service, which will initially be provided on selected North Atlantic routes, will be available on nearly the entire Lufthansa intercontinental network by the end of 2011. "Inflight Internet on board our long-haul flights is an innovation in the interests of our customers," says Thierry Antinori, mem-ber of the Lufthansa German Airlines Board. "FlyNet complements the consistent commu-nications service offering for Lufthansa customers at all points of the travel chain. It pro-vides them with completely new and unique opportunities to spend their time on board or while waiting for connecting flights."

The extremely fast, high-performance inflight Internet service gives passengers with a WLAN-enabled laptop or smartphone unlimited online access. Thanks to the high band-width, emails – including those with large file attachments – can be sent and received without any time delay. Business travellers can also access their company's Virtual Pri-vate Network (VPN). In spring 2011, inflight data communication should also be possible using the mobile phone standards GSM and GPRS. In addition to the wireless Internet (WLAN) service, Lufthansa customers will then be able to use their mobile phones to send and receive SMS text messages and transfer data with smart phones such as the iPhone or PDAs such as BlackBerry.

FlyNet is incredibly easy to use. Passengers – no matter where they are sitting on the aircraft – can logon to the Internet with any WLAN-enabled device, just as at any public hotspot, or in the near future set up a connection with a GSM/GPRS-enabled device. After opening the browser, they can automatically access the exclusive, free Lufthansa FlyNet portal, where they will find constantly updated news about economics, politics, sports and entertainment. Via this portal they can access the Internet service provided by Deutsche Telekom, which is to be paid from February 2011 on. Service provider information detail-ing the various billing options is available on this portal as well, including payment via credit card, via integrated roaming partners or by redeeming Miles & More award miles. The price for one hour's online access is 10.95 euros or 3,500 miles, while the 24-hour flat rate is 19.95 euros or 7,000 miles. Under the 24-hour flat rate agreement, passengers can access the Internet on all Lufthansa connecting flights equipped with a hotspot during the period of validity as well as after the flight in Lufthansa lounges.

Thanks to the introductory FlyNet offer, inflight Internet access will be available for free on FlyNet-equipped aircraft until January 31, 2011.

Lufthansa operated the world's first scheduled flight with broadband Internet access on 15 January 2003. From May 2004 until the end of 2006, when Lufthansa's then-partner Con-nexion by Boeing discontinued the service, wireless broadband Internet enjoyed increas-ing popularity. The technology also proved very reliable. By the end of 2006, some 69 of Lufthansa's long-range aircraft were equipped with FlyNet, making the Lufthansa fleet the largest Internet-enabled long-haul fleet in the world, with about 30,000 users per month.

In this article: airline, airplane, broadband, Cloudstream, Deutsche Telekom, DeutscheTelekom, europe, european, flynet, in-flight, in-flight internet, in-flight wifi, In-flightInternet, In-flightWifi, intercontinental, international, internet, Lufthansa, Panasonic, wifi
All products recommended by Engadget are selected by our editorial team, independent of our parent company. Some of our stories include affiliate links. If you buy something through one of these links, we may earn an affiliate commission.
Share
Tweet
Share