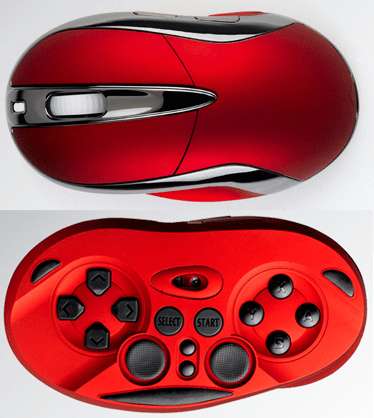 No, your eyes aren't deceiving you -- not one little bit. You're looking at a PC gamepad built into the bottom of a mouse, and not a drab one at that. It's called the Shogun Bros. Chameleon X-1, and if you just fell in love, we're afraid there's no suggested price, shipping date or a way to buy it yet. What we do know are the promised specs, which include a 5-stage adjustable 1600dpi optical sensor with 125Hz polling rate -- which admittedly sounds last gen -- that connects to your Windows PC over a USB dongle sporting 2.4GHz wireless. There's 14 buttons on the bottom, 7 on the top, and the company's support page suggests the device has force feedback as well. We're not terribly bullish on the "sophisticed Norway Nordic Chip System" the controller apparently has, but considering there are three very legitimate looking pictures of the device in our gallery below, we're not going to write it off quite yet.

Update: Shogun Bros. tells us the Chameleon should be available in Q1 2011, for the suggested retail price of $55. 3
In this article: chameleon, Chameleon X-1, ChameleonX-1, controller, game controller, GameController, gamepad, gaming mouse, GamingMouse, mice, mouse, pc gamepad, PcGamepad, peripheral, Shogun, Shogun Bros, Shogun Bros., ShogunBros, ShogunBros., X-1
All products recommended by Engadget are selected by our editorial team, independent of our parent company. Some of our stories include affiliate links. If you buy something through one of these links, we may earn an affiliate commission.