D. Murph
December 16th, 2010
In this article: available, camera, casio, digital camera, DigitalCamera, EX-H20G, Exilim, Exilim EX-H20G, ExilimEx-h20g, geotagging, GPS, h20, hybrid gps, HybridGps, now available, NowAvailable, on sale, OnSale, Point and Click, point-and-shoot, PointAndClick, review, video
Three months from introduction to on sale ain't too shabby in the camera world, and that's exactly what Casio has managed to accomplish with the intriguing new Exilim EX-H20G. We first spotted this point-and-shoot at Photokina in Germany, and now we've had a solid week to put it through its paces. Naturally, the inclusion of Hybrid GPS (read: engineered to find a location indoors as well as outdoors) is the standout feature and key differentiator, but the 14.1 megapixel sensor, 10x optical zoom and 720p movie mode are all fine additions. It certainly isn't the slimmest compact on the market, nor the cheapest at $349.99, but do the unique aspects of this thing make the price easier to stand? Join us after the break for our thoughts.
%Gallery-109236%
Casio 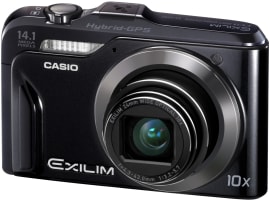 We'll just go ahead and get this out there: the EX-H20G isn't slim. In fact, it's nowhere close. Compared to ultraslim compacts outed recently by Canon and Sony, this unit's downright bulky. But then again, Casio's not trying to slip this into every pair of tighter-than-necessary jeans. We'll partly excuse the bulk for two primary reasons: there's a 10x optical zoom here, and there's a Hybrid GPS module. Neither of those are particularly easy to conceal, and for having a class-leading zoom, the size is actually decent. We're just warning you to look elsewhere if you need a point-and-shoot that's deadly thin. We actually aren't huge fans of the overall design either (aesthetically speaking), but the button layout is about as solid as it gets. The zoom toggle surrounding the shutter button is startlingly fluid, and the rear button layout is remarkably easy to get accustomed to. Our only major design gripe? The video mode isn't toggled with a slider or dedicated selector; you simply punch a red 'Record' button on the back and it's rolling. We'd prefer a little more control before the video actually starts, but there you have it. Oh, and speaking of the video mode -- here's a clip we shot in 720p.

Diving into the software -- which of course will require gazing into the lovely 3-inch rear LCD -- we're greeted by a user interface that we learned to love after a week of use. The screen itself is dazzling, even in broad daylight, though it doesn't support touch inputs. The UI is one that we managed to learn without seeking guidance in the user guide, which is always a good sign. It takes roughly 1.5 seconds from the moment the power button is pressed until you're greeted with an on-screen image and able to snap a picture, which ain't too shabby in the P&S realm. Casio managed to stuff quite a bit of information on the display, and while the litany of "Best Shot" modes actually didn't perform too poorly, the standard 'Auto' mode was our favorite. Interestingly enough, Auto is about the only setting where you're free to manually (and individually) tweak the flash, focus mode, ISO, image quality, autofocus points, self-timer and exposure. There's a fair amount of manual controls to be had, which will definitely pleased the more advanced shooters out there.


The built-in mapping system is obviously a huge selling point for this camera. In essence, it's a live map that shows exactly where you're presently positioned, and then you can zoom out / in and toggle around to spot pre-loaded tourist attractions. It's a handy way to learn about the Arc de Triomphe if you're not about to turn on data roaming to see what Google Goggles has to say about that giant monument you're staring at, but there simply aren't enough POIs here to make this truly revolutionary. There's also no real interaction opportunities; you can use the map to find out how close you are to a certain point, view a few press images of the attraction... and, well, that's about it. It's a nice idea in theory, but we'd prefer to snag a MiFi from Xcom Global and actually use our smartphones to investigate any creations we sneak up on while venturing out. Have a look at our overview video above if you're struggling to visualize.

We'll hand it to Casio -- the H20G is quick. Bootup is quick (~1.5 seconds), zooming is ridiculously quick (well under two seconds from 1x to 10x), and the shutter snaps hastily whenever it can get a focus lock. In fact, the unpredictable focus lock is about the only gripe we have with handling. While in Premium Auto mode, it constantly tries to focus on whatever you're aiming at, and when we say constantly, we mean constantly. It's fairly annoying, particularly since you can hear the gears grinding as it attempts to grab a lock. In general, we preferred the standard Auto mode, where a conventional half-shutter-button press looks for a focus lock. And while there's a fairly impressive macro mode here, we found ourselves having to manually select it on a few close encounters -- not exactly a deal-breaker, but we'd encourage any to-be owners to get their hands dirty with the manual controls in order to extract the best possible images. 'Auto' simply can't read your mind 100 percent of the time. Overall, we found it to be one of the quicker point-and-shoots on the market, and while the flash performed surprisingly well for its size, the location may be a problem for those who tend to let their index finger slide up towards the top of the camera.

As for the Hybrid GPS? It just works. Every single time. We've read that the camera checks in with your location on occasion, even when powered off, enabling it to grab a location lock right away if you need to fire it up and snap a shot hastily. That's a huge boon; traditional GPS receivers can take multiple minutes to find a lock if booted up cold, and we never once had an image taken sans a correct geotag. We loaded our test gallery up in iPhoto, and sure enough, they automatically populated the 'Places' tab accurately. It's beautifully simple, and if you're the argonaut in your family, this is a fantastic camera to have in your back pocket. Being able to pinpoint on a map exactly where a photo was taken is a terrific feature for the avid explorer, and the fact that this geotagging solution works so flawlessly will probably help you rest a lot easier. No more waiting for a lock, and no more wondering if the metadata was indeed embedded. You'll obviously pay the price with a somewhat bulkier camera, but hey, life's about tradeoffs.

Great handling, an above-average UI and Hybrid GPS don't count for much is the H20G's image quality is awful, so we're happy to report that it's far from it. In ideal outdoor conditions, the sharpness and accuracy of colors is downright impressive. Some of the snaps we managed to capture could easily rival that of a low-end DSLR in a blind test, even shots that were taken with the zoomer fully extended. It's still a hair slow when it comes to capturing split-second moments at an outdoor sporting event, but for everything slower than that you'll have no issues grabbing an image sans blur. Indoors, as you'd expect, there's another story to be told. You won't get far with this camera in low-light, at least not without the flash. The good news is that the flash does a respectable job, and better still, the ISO range on this camera allows you to shoot handheld for longer in less-than-optimal lighting conditions.

You can manually force the camera to shoot at up to ISO 3200, a number that has just recently found itself in the P&S arena. Contrary to popular belief, doing so won't actually ruin each and every shot with ungodly amounts of grain. The shot above was captured indoors on a cloudy day at ISO 3200, handheld, and while it's obviously compressed to just 600 pixels wide, you could easily get an 8- x 10-inch photo out of the original without a tremendous amount of visible noise. You could also make it look dramatically better with about three minutes in Photoshop. For concert goers and those who find themselves inside more often than not, having a useable ISO 3200 setting is a real treat; it's obviously nowhere near as crisp as the ISO 200 to 800 range, but it's miles better than being forced to look at shot with blur. For a more detailed look at how the H20G stacks up in an exhaustive ISO test, take a look at the writeup at ePhotoZine.
%Gallery-109237%

The EX-H20G is definitely a standout device. You'll be hard-pressed to find another point-and-shoot on the market with a feature set like this one, particularly when you consider the impeccable Hybrid GPS system. It's not the smallest nor the cheapest pocket cam on the market, but if you've been yearning for a geotagging compact with 720p video, above-average image quality and a 10x zoom, it could definitely be $350 well spent. Sure, we wish the inbuilt mapping system was a bit more robust (and interactive, while we're on the subject), but given that each and every shot / video we grabbed integrated perfectly with iPhoto and Picasa with regard to location, we can't kvetch too loudly. We'd still steer clear if you'll be shooting a good bit of fast action or need the absolute thinnest camera out there, but for everyone else with a bolstered budget, this one's definitely worth a look. Trouble is, should you pull the trigger now, or wait for the impending post-CES price drop? Ah, the choices we're saddled with.
All products recommended by Engadget are selected by our editorial team, independent of our parent company. Some of our stories include affiliate links. If you buy something through one of these links, we may earn an affiliate commission.