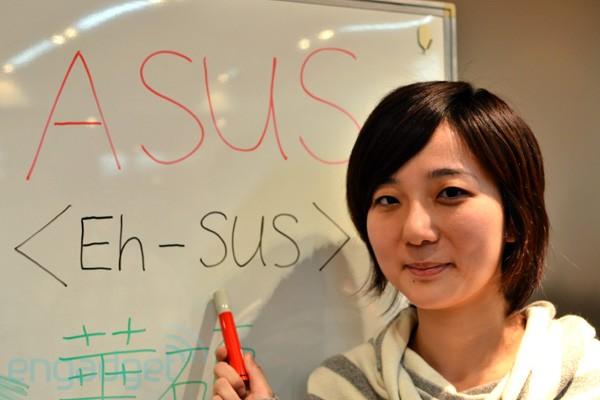 A-suh-ss? Ah-sue-ss? As-ses? Nope, all wrong. We've been informed by ASUS that its head honcho has recently set a new rule in an attempt to rid our frustration, so what used to be "Ah-seuss" is now "A-seuss" (or "Eh-SUS" according to Taiwanese phonetics, as pictured). The logic behind this? Apparently it's a direct chop from the pronunciation of "pegasus" -- the origin of the company's name -- which ironically seems to favor the former diction. Anyhow, let's not confuse ourselves any further and just study this lovely lady's video demo after the break.

In this article: asus, asustek, Asustek Computer, AsustekComputer, clarification, company, company brand, company name, CompanyBrand, CompanyName, exclusive, hong kong, HongKong, name, pronounce, pronunciation, say, video
All products recommended by Engadget are selected by our editorial team, independent of our parent company. Some of our stories include affiliate links. If you buy something through one of these links, we may earn an affiliate commission.
Share
Tweet
Share