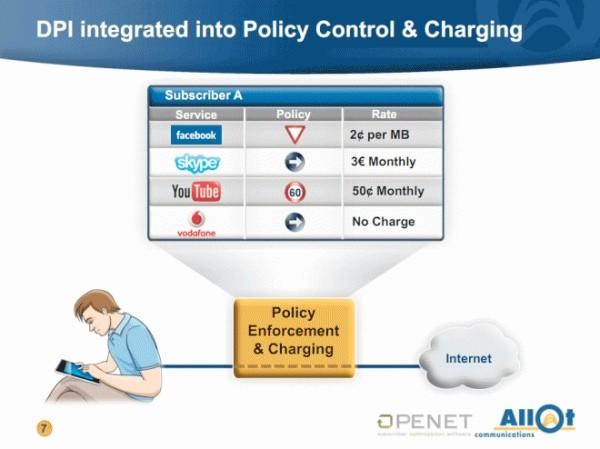 That slide above is no joke -- it comes from a marketing webinar put on by two companies that count Verizon, AT&T and Vodafone as clients, and it describes a system that identifies customer internet activity and charges a different rate for using Facebook than watching YouTube, while allowing access to Vodafone services for free. Yes, that's basically the nightmare scenario for net neutrality advocates. The two companies behind the slide are Allot Communications and Openet, which sell subscriber-management tools to carriers around the world -- tools that Allot's director of marketing says can scan even encrypted packets to determine what service customers are using and charge accordingly. We're not making this up -- here's the direct quote from the webinar:

[We use] a number of different methods to accurately identify the application -- methods like heuristic analysis, behavioral and historical analysis, deep packet inspection, and a number of other techniques. What's key is that we have the best application identification available on the market, which means that even applications that are encrypted or use other methods to evade detection will be correctly identified and classified... We essentially feed this real-time information about traffic and application usage into the policy and charging system. Each subscriber has a particular service plan that they sign up for, and they're as generic or as personalized as the operator wants.

Yeah, that's not how anyone actually wants the internet to work -- except carriers, who've been saying increasingly insane things about charging even smartphone manufacturers for customer data usage lately. What's more, it's rumored that the FCC will cave to Verizon and AT&T and exempt wireless internet service from major parts of net neutrality regulation it's expected to pass next week, so this nonsense could very well hit the US sooner rather than later. We'll be keeping a close eye on things -- we'll let you know. Meanwhile, listen to the webinar yourself immediately below.

In this article: allot communications, AllotCommunications, fcc, fierce wireless, FierceWireless, net neutrality, NetNeutrality, openet, webinar
All products recommended by Engadget are selected by our editorial team, independent of our parent company. Some of our stories include affiliate links. If you buy something through one of these links, we may earn an affiliate commission.
Share
Tweet
Share