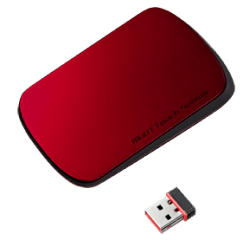 Not so fond of the Magic Mouse, are you? How's about a flattened version, sans Bluetooth? That's exactly what we're being presented with here, as Sanwa's MA-TOUCH1 looks like the lovechild of Apple's own multitouch critter and Logitech's M505. In truth, the only real design cue this guy snags from the Logi is its Unifying Receiver, signifying that it relies on wireless USB rather than BT. The design scheme is definitely of interest -- rather than being curved to fit the shape of a relaxed palm, it's totally flat up top, supporting four-direction scrolling and two-finger swipes. She's on sale now in four different colors (red, white, black and silver), with ¥4,300 ($52) standing between you and something you may or may not ever actually use to control your cursor.

In this article: accessory, magic mouse, MagicMouse, mouse, multitouch, multitouch mouse, MultitouchMouse, peripheral, Sanwa, unifying receiver, UnifyingReceiver, usb mouse, UsbMouse, wireless mouse, WirelessMouse
All products recommended by Engadget are selected by our editorial team, independent of our parent company. Some of our stories include affiliate links. If you buy something through one of these links, we may earn an affiliate commission.
Share
Tweet
Share