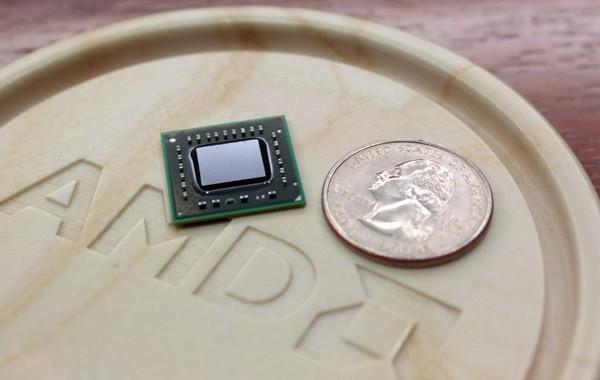 Is this real? Is this happening? It's been over four years since AMD and ATI completed their $5.4 billion merger with the promise of Fusion hybrid CPU / GPU chips, and after what's seemed like nearly endless delays, the company's delivering here at CES 2011. And it's delivering in a big way -- the first Fusion chips are a direct assault on Intel's Atom and the netbook market, offering what AMD says is better CPU performance, vastly better GPU performance with DirectX11 support, dedicated 1080p HD video processing and HDMI out, and "all day" battery life that can hit 10 or more hours. There are four total chips in two families built around the new "Bobcat" CPU core to start: the "Zacate" E-Series for mainstream laptops, AIOs and small desktops will have an 18W TDP and come in the 1.6GHz dual-core E-350 and the 1.5GHz single-core E-240, while the "Ontario" C-Series for HD netbooks and "other emerging form factors" will clock in at 9W TDP and come in the dual-core 1.0GHz C-50 and the single core 1.2GHz C-30. The "Llano" A-Series designed for mainstream laptops will offer up to four cores and arrive later this year.

We're expecting to see a number of systems based around the E-Series -- the Lenovo X120e and HP Pavilion dm1 have already been announced -- and we're anticipating quite a flood in the days ahead, which we're more than eager to test out. AMD's making some serious claims -- it says "Fusion processors are, quite simply, the greatest advancement in processing since the introduction of the x86 architecture more than forty years ago" -- and if can deliver on its performance promises, it'll pretty much turn the entire netbook market upside down. What's more, the company says tablets and other embedded devices are coming in the first half of 2011, so things could get seriously interesting. PR after the break.

LAS VEGAS - CES – Jan. 4, 2011 - Today at the Consumer Electronics Show, AMD (NYSE: AMD) launched a new class of accelerated processor that combines more compute capabilities than any processor in the history of computing. The AMD Fusion Family of Accelerated Processing Units (APUs) incorporate – in a single die design – multi-core CPU (x86) technology, a powerful DirectX®11-capable discrete-level graphics and parallel processing engine, a dedicated high-definition video acceleration block, and a high-speed bus that speeds data across the differing types of processor cores within the design. New generations of desktop, notebook and HD netbooks are now available based on AMD Fusion APUs at affordable price points. Tablets and embedded designs based on AMD Fusion APUs are expected be available later in Q1 2011. The new range of products features include stutter-free HD video playback, breakthroughs in computational horsepower to handle the most demanding applications, DirectX 11-capable graphics and all-day battery life.i

"We believe that AMD Fusion processors are, quite simply, the greatest advancement in processing since the introduction of the x86 architecture more than forty years ago," said Rick Bergman, senior vice president and general manager, AMD Products Group. "In one major step, we enable users to experience HD everywhere as well as personal supercomputing capabilities in notebooks that can deliver all-day battery life.i It's a new category, a new approach, and opens up exciting new experiences for consumers."

HD 2.0 Everywhere
High definition (HD) content is ubiquitous today. From YouTube videos to DirectX 11 games to Blu-ray, the world is tapping into various ways to enjoy this content with the computer serving as the hub. And thanks to the VISION Engine from AMD, a set of capabilities unique to all AMD Fusion APU-powered PCs, the visual side of computing never looked more vivid and realistic. The VISION Engine is an unmatched combination of:
• DirectX 11-capable graphics
• Massive parallel processing to speed application performance
• The UVD3 video acceleration block found in the new AMD Radeon™ HD 6800 Series GPUs
• Unique graphics driver capabilities updated on a monthly basis to continuously improve visual performance

Selecting a PC equipped with the VISION Engine and software from AMD partners means Internet browsing is a faster, application-like experience; 1080p HD video playback is gorgeous, smooth and quiet; standard definition video looks high-definition; 2D content can be converted into stereoscopic 3D; even the most graphics-intensive websites load quickly; manipulating HD content is fast and easy; and 3D gaming at HD resolutions is fast and life-like.

Personal Supercomputing
Much of a computing experience is linked to software and, until now, software developers have been held back by the independent nature in which CPUs and GPUs process information. However, AMD Fusion APUs remove this obstacle and allow developers to take full advantage of the parallel processing power of a GPU – more than 500 GFLOPs for the upcoming A-Series "Llano" APU – thus bringing supercomputer-like performance to every day computing tasks. More applications can run simultaneously and they can do so faster than previous designs in the same class.ii

Out power and Outperform: E-Series, C-Series and A-Series APUs
The 2011 low power platform (formerly codenamed "Brazos") enhances the everyday computing experience and is available beginning today in two APU variations: E-Series and C-Series. These APUs feature the new x86 CPU core codenamed "Bobcat". "Bobcat" is AMD's first new x86 core since 2003 and was designed from the ground up to deliver stellar mobile performance.

The 2011 mainstream platform is primarily intended for performance and mainstream notebooks and mainstream desktops. It will feature the 32nm die A-Series "Llano" APU, which includes up to four x86 cores and a DirectX 11-capable discrete-level GPU, and is scheduled to ship in the first half of 2011 and appear in products mid-year.
In this article: amd, amd fusion, amd vision, AmdFusion, AmdVision, bobcast, bobcat, breaking news, BreakingNews, c-30, c-50, ces, ces 2011, ces2011, e-240, e-350, e-series, e-seris, fusion, llano, ontario, vision
All products recommended by Engadget are selected by our editorial team, independent of our parent company. Some of our stories include affiliate links. If you buy something through one of these links, we may earn an affiliate commission.
Share
Tweet
Share