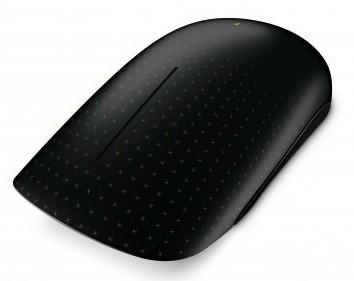 No, that's not Microsoft's Arc Touch mouse, it's just the Touch Mouse. Confusing, we know, but this one is more than just a mouse with a touch strip -- the entire top of it consists of a "matrix of capacitive touch-sensing electrodes," and naturally, it supports different multittouch gestures. Based on Microsoft Research concepts, the device will support a slew of gestures, including flicks, pinch-to-zoom, and panning. That all is best seen in the video below, but the sleek black mouse also packs Microsoft's BlueTrack technology, so it should work on carpets, wood, etc. Like most other 2.4GHz mice out there it has a small USB receiver -- sorry, no Bluetooth here. Undoubtedly, it looks pretty sexy, but according to the press release after the break it won't be available until June for $79.95.

Updated: Microsoft has launched its Touch Mouse landing page and the mouse is up for pre-order now at Amazon. We'd wait for our hands-on impressions before pulling out the plastic, but that's just us.

Update 2: We're back again. The Windows Team Blog has some more information on the gestures. We also stole a few of their pictures and put them in the gallery below.

Show full PR text
Microsoft Touch Mouse is the new multitouch mouse for Windows 7 that will let you click, flick, scroll and swipe so it's easy and fun to interact with your PC.

Designed to enhance your Windows 7 usage, the Touch Mouse combines the virtues of a mouse with the rich natural language of gesture to offer a more intuitive way to navigate your PC. Touch Mouse also features BlueTrack Technology so you can track virtually anywhere, anytime.1
Behind the Scenes

Did You Know?
The Touch Mouse evolved from the Mouse 2.0 project, a Microsoft Corp. study that combined the standard capabilities of a mouse with multitouch sensing and resulted in five prototypes. Although all the Mouse 2.0 prototypes explored different touch- sensing strategies and form factors, the "Cap Mouse" was ultimately selected to become the Touch Mouse.

Multitouch Technology
The top of the Touch Mouse is composed of a matrix of capacitive touch-sensing electrodes to track the position of the user's fingertips along its surface.

Meet Benko
Hrvoje Benko, one of the researchers behind the Touch Mouse, worked to create the technology and gestures for this new mouse. He is available for interviews if you are interested in learning more about the development of Touch Mouse.

Top Features and Benefits
- New! Multitouch surface lets you use natural gestures to snap, navigate and control content with a touch of a finger.
- New! Flick scrolling functionality lets you quickly scroll and pan through windows and documents.
- New! Improved task switching on Windows 7 gives you superior mouse performance and experience on the PC.
- BlueTrack Technology allows you to ditch your mouse pad and mouse on virtually any surface,1 including granite, marble, carpet and wood.
- Snap-in Nano transceiver gives you the option to leave the transceiver plugged into the computer or conveniently store it in the bottom of the mouse.
- 2.4GHz wireless technology gives you a confident wireless connection.
- Ambidextrous design for use with either hand.

Touch Mouse Gestures - Easy as 1, 2, 3
Touch Mouse lets you do everything you're used to doing with a mouse, such as point and click, but also adds gestures with one, two or three fingers to amplify the Windows 7 operating system by creating simple shortcuts to the tasks you want to do most.

Shorter Shortcuts for Windows 7
With the Touch Mouse, you can use your mouse to do tasks that normally involve the keyboard.

Availability and Pricing
Touch Mouse will be available in June 2011 for the estimated retail price of $79.95 (U.S.).2 It will be available for presale starting today at Amazon.com and the Microsoft Store online.

Touch Mouse is backed by a worldwide three-year limited hardware warranty. The limited warranty and license agreement are available at http://www.microsoft.com/hardware/warranty.

Some information in this fact sheet relates to pre-release products, which may be substantially modified before they are commercially released. Microsoft makes no warranties, express or implied, with respect to the information provided here.

1 BlueTrack Technology does not work on clear glass or mirrored surfaces.
2 Estimated retail price. Actual retail price may vary.
In this article: breaking news, BreakingNews, ces, ces 2011, ces2011, computer mouse, ComputerMouse, mice, Microsoft, Microsoft Touch Mouse, MicrosoftTouchMouse, mouse, touch mouse, TouchMouse, video, windows 7, Windows7
All products recommended by Engadget are selected by our editorial team, independent of our parent company. Some of our stories include affiliate links. If you buy something through one of these links, we may earn an affiliate commission.
Share
Tweet
Share